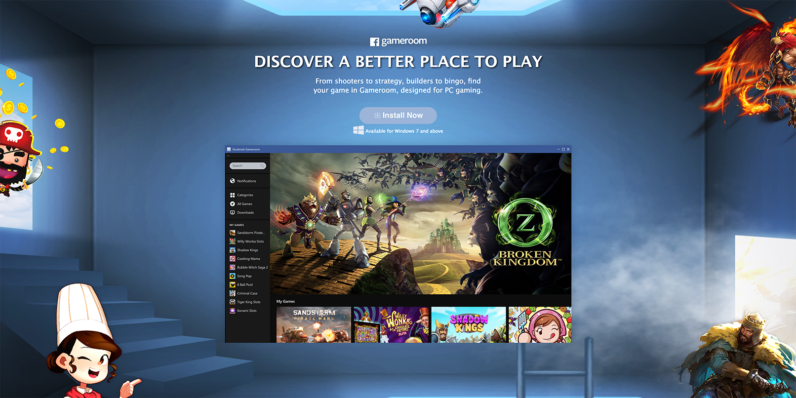 In its continued effort to become the internet, or at least the parts of the internet you want to visit, Facebook is now diving into the gaming world… for realsies this time. We’re not talking ‘Candy Crush’ and ‘Farmville’ here, either.

We first learned of Facebook’s plans in the gaming niche back in May, with ‘Games Arcade‘ — a name that you just knew would lead to an awful experience. Luckily, the company dropped the awful moniker in exchange for ‘Facebook Gameroom’ at today’s Unity game development platform conference.

Launching today for developers, Gameroom is a dedicated PC app that seems to have its sites firmly set on Steam’s 125 million active users. To do so, it seems safe to say the pitch will revolve around its 1.75-billion users and the massive reach potential this offers developers. For a 30-percent revenue cut (the same as Steam), Facebook could potentially make your indie platformer the next billion-dollar indie sensation.

There’s also the appeal of Facebook’s own advertising platform. As a game developer, marketing to gamers on-platform with tools as powerful as those offered on Facebook’s seems like a great use of marketing dollars. Then again, gamers could decide that Facebook is too casual a platform for blockbuster titles and opt instead for more traditional online retailers like Steam.

We’ll have to wait and see.

Read next: GEMA finally loosens its grip on YouTube in Germany