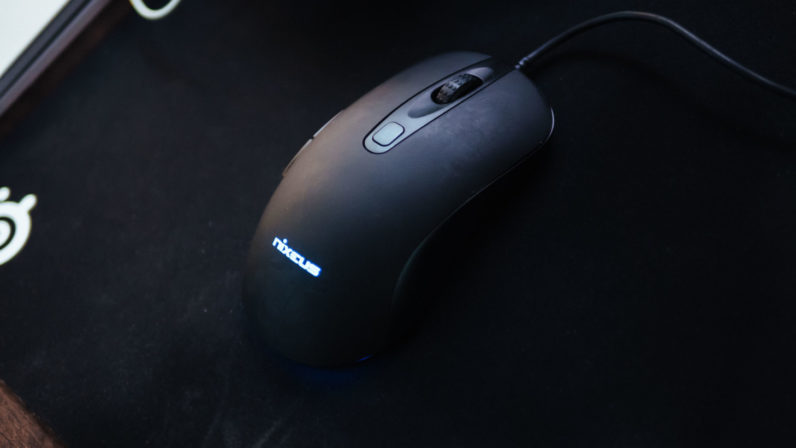 If you’re looking for a pro-caliber gaming mouse on the cheap, you should check out the Nixeus Revel.

No, this isn’t a promo; the Revel is just a really good, barebones gaming mouse that’s easy to recommend for its comfortable shape and top-notch sensor at around $40-$50.

You might think ‘barebones’ is a pejorative term for a gaming mouse, but for many professional and advanced gamers – especially FPS pros – extra features are just added weight.

I mean that weight point quite literally too – think of how professional racing vehicles shed unnecessary accessories compared to flashy supercars.

‘Counter-Strike Global Offense’ pros generally like their mice at 100 g or less. The Revel sits at a comfortable 85 g; it’s one of the lightest gaming mice I’ve tried. While many brands try to add some heft to their gaming mice to give them a premium feel, Nixeus got the weight right (you can buy a heavier version of the mouse too). The teflon feet glide smoothly across my SteelSeries Qck mousepad, providing a sense of responsiveness.

The mouse itself is of a medium-large size, emulating the popular shape of the SteelSeries Sensei. Though I prefer more contoured, ergonomic shapes (Logitech’s classic MX510 and Razer’s DeathAdder come to mind), the Nixeus feels comfortable enough for palm and claw style grips – I use something in between.  The mouse comes in a glossy white finish and a rubberized matte black; the latter is more likely to wear off, but I much prefer the feel.

The cable is mercifully thin. A bungee is always recommended to save you the hassle of your cable getting caught on something and screwing up you aim, but this about as thin as gaming mouse cables get.

Meanwhile, the buttons are responsive and adequately clicky, with Omron switches rated to survive ’20 million clicks.’ The scroll wheel is less defined than I’d like though.

The mouse’s main selling point is its sensor, the PixArt 3360. It’s a slight variation of the sensor in Logitech’s top gaming mice (G Pro, G900, G502, etc), and is widely acknowledged as the best gaming sensor around for its accurate tracking and indifference to acceleration for the quickest of 360s.

You can switch through fixed DPI options via a button below the scroll wheel, with each color representing a different setting. I tested both 800 DPI (green) and 1,2oo DPI (blue). Though the mouse can go up to 12,000 DPI, you probably never want to go above 1,600 (yellow).

I’ve been playing Counter-Strike since 1.6 was a thing, and though I’m no great shakes, the Revel felt like an instant upgrade over the still-great Razer Diamondback Chroma I had been using before.

Part of that was a preference for the shape, but there was a distinct sense the mouse was doing a better job of translating my movements into headshots.

I was trying Logitech’s G502 at the same time, and while they shared nearly identical sensors and I much prefer the G502’s shape and button layout, the Revel’s weight and thin cable seemed to help me perform just a little better. It’s also about $20 cheaper

I also tried it against the Revel against the G900, and preferred the latter for being wireless. It also costs $150, so the comparison is kind of moot unless you have that kind of cash to spend on a mouse.

You obviously get a lot of performance for $40-$50 bucks, but as much as I appreciate the barebones approach, I do like having some customization.

In particular Logitech and Razer’s software let me adjust the way buttons behave in different apps and games; I use the side buttons on the G900 for custom functions in Photoshop, for instance, and remap some of the other buttons for switching virtual desktops and programs easily.

That, and my ever-so-slightly worse performance compared to the G900 and G Pro mean I’m not going to use it as my primary mouse, but I’d keep it around as a backup and would be totally happy if this were my only mouse.

Of course, if you’re a an advanced player, you probably already know what you want in a mouse. I also have to mention it’s worth doing some research and deciding which mouse has the balance of shape, weight performance and features right for you; for example, the DM-1 Pro S is a nearly identical mouse from a more established brand at $50.

If you’re not a pro, the Revel won’t suddenly make you one, but it will help denounce your excuses for sucking.

Read next: Google Maps gets hands-free navigation at last