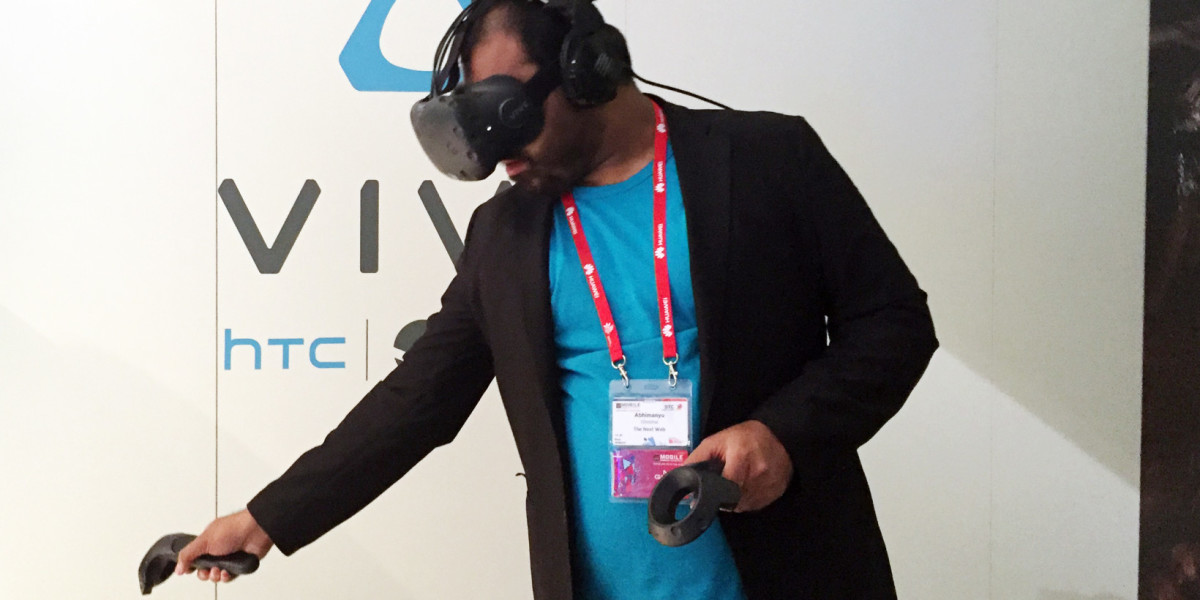 One of the reasons I was excited to attend Mobile World Congress in Barcelona this year was to try out HTC’s Vive VR headset in person. After spending an hour with it, I’m happy to report that the Vive lives up to the hype and then some.

The $799 Vive kit includes a headset tethered with numerous cables, two wireless controllers and two motion tracking base stations that you’ll need to set up in your room.

The headset is comfortable enough for extended gaming sessions and I didn’t feel any sort of motion sickness during my demo. I also liked how the controller design evenly distributed weight across the top and handles so they were easy to grip and use.

Unlike Google Cardboard, the Samsung Gear VR and LG’s 360 VR, this headset connects to a Windows PC and requires considerable firepower to offer a decent experience. HTC recommends a computer with at least a $380 Nvidia GeForce 970 graphics card, so you can expect to spend another $1,000 on your desktop for VR gaming.

In addition, you’ll need a few square feet of space in which to move around while playing and mount the motion-tracking base stations above eye level on opposite walls.

That sounds like a lot of money and effort to improve your gaming experience — but it’s not like you can replicate the rush you get with content on the Vive for any less.

What about mobile VR? Well, the Vive has significantly larger lenses and a pair of screens with a combined resolution of 2160 x 1200 pixels that make for a 110-degree field of view (FOV). Cardboard headsets typically offer a 100-degree FOV, which doesn’t sound like a lot less, but the Vive’s taller viewable area makes a huge difference.

It’s also a tad more cumbersome than compact VR headsets, but HTC has a couple of neat tricks up its sleeve to make the Vive less of a pain to use.

Double-tap a button on the controller to engage the front camera and see what’s around you without taking off the Vive. You can also receive call notifications from your iOS or Android phone and quickly reply to messages by choosing from a bunch of preset responses.

Add in smoother and sharper graphics and the ability to interact with multiple buttons and by physically moving and you’ve got yourself a recipe for incredibly immersive VR experiences.

There’s also the Oculus Rift to consider, and you can get it for $200 less than the Vive and a month earlier too. But at that price, it comes with an Xbox One controller. If you want the company’s Touch controllers, you’ll have to wait until the second half of this year for them.

Heads-on with the Vive

The first piece of content that came into view during my demo was Wevr Labs’ ‘theBlu: Encounter’. I was able to move around the deck of a sunken ship and see and reach out to touch fast-moving fish all around me.

When a massive blue whale swum slowly in front of me, I literally took a few steps back to dodge its tail, completely forgetting that none of what I was seeing was real.

There were a bunch of other cool demos, including Job Simulator, in which I completed basic tasks like printing photos, answering the phone and chugging coffee in an office.

An app from Google called Tilt Brush let me paint in space with a range of animated materials like light beams and fire — one controller served as a digital palette with colors and tools and the other as a brush.

There was also a shooter game in which I had to dodge enemy fire while aboard a spaceship. My initial loadout included laser guns in both hands, but I could reach behind my back to switch one for a shield and defend myself.

It introduced a new level of flexibility that you don’t usually get with traditional desktop games. You could avoid enemies in a variety of ways instead of being restricted to using shields or ducking, and you can hold your gun sideways while you shoot, as ill-advised as that may be in real life.

A puzzle title called Water Bears VR had me walk around elaborate arrangements of pipes and reconfigure them so they’d pour colored liquids on stange little creatures to free them from bubbles.

It felt far more immersive than desktop games because it required me to move around and manipulate objects carefully using the handheld controllers. If you’ve ever seen the 90s hit puzzle game show The Crystal Maze, you’ll know what this feels like.

Between the high-end PC, the pricey headset and the space you need to set up motion trackers and play, HTC is asking a lot of people who want to enjoy VR in all its glory — but if you can afford it all, you can rest assured that it’ll absolutely blow you away.

The Vive goes on sale on February 29 and will ship in April.