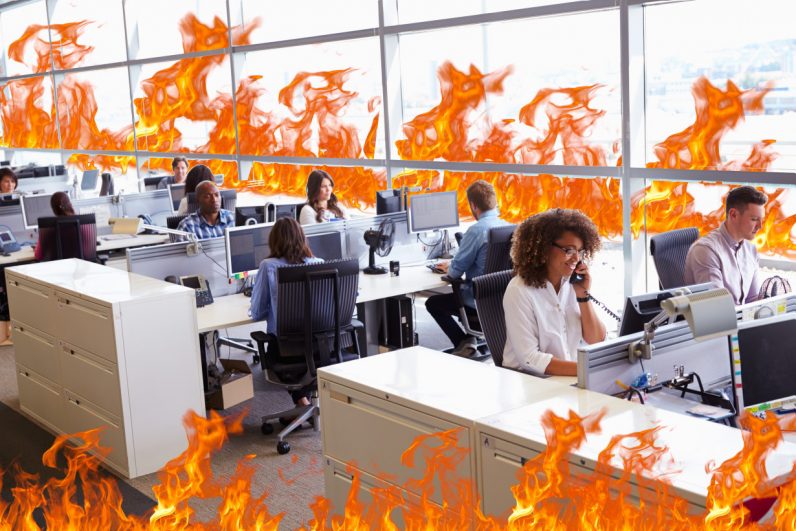 The open office floor plan is kind of like socialism. It sounds utopian in theory, but in practice leads to a lot of pain and suffering. Yet, there will always be those dreamers who read Karl Marx’s, or in this case Frank Lloyd Wrights’, vision and say – could we do it better? Could we be the ones who will usher in the open office utopia?

Who came up with this horrible idea?

In the early 20th century, just as socialism transformed into its particularly virulent form, communism, and preparing to take over half the world, Frank Lloyd Wright, Frank Duffy, and a cohort of early 20th-century modernist architects were looking at walls and seeing nothing but fascist constructs.

They envisioned an open office. Frank Lloyd Wright brought it into reality for the first time in his 1906 design of the Larkin Administration Building in New York. The building was designed like an open plan factory, few walls, but many workers.

The open workspace emerged out of this idea in 1950s Germany. Two brothers, Eberhard and Wolfgang Schnelle, created the “office landscape”, a room without interior walls that was furnished minimally and decorated with plants to help create open communication.

Unfortunately, Lloyd Wright and his contemporaries’ ideas took off in all of the wrong ways – companies embraced the open office, but only as a means to pack as many workers as they could into a single office filled with long rows of assembly line desks and machine-like humans.

In reaction to this new desolate office space – complete with noise, the absence of privacy and many of the other complaints leveled at the modern open office workplace – Robert Propst, a designer at the Herman Miller Company, created the cubicle. This created a modicum of privacy but did not solve the problem of noise, to Propst’ horror. As more corporation moved all of their employees into his cubicle filled version of the open office, he called it nothing short of “monolithic insanity.”

The modern office has failed

Developments in recent years have seen workplace design change to a point where the desk is no longer seen as the main point of productivity. Offices have also incorporated research backed design to improve the office experience, such as natural daylight, windows with views of trees and plants and better air quality, and different spaces with different designs and purposes which all help employees think, remember, concentrate and perform better.

Companies are getting creative — NVIDIA’s new headquarters has replaced stairs with platforms, Microsoft is building treehouses, and Google has slides and ping pong rooms.

Yet, little has been done to challenge the primacy of the open office. In fact, as much as 70 percent of the American workforce is employed in open offices. So despite these innovations, the same initial problems and failed promise remain.

Decades of research have shown that the modern open office is a failure. Researchers almost unequivocally agree that open offices drain productivity, reduce employee well being, decrease employee trust, and even increase cost.

As a result, many claim it is time for the open plan office to die and the mobile office to live. However, there are those that still believe in the utopian dream of the open office.

Are soundscapes the open office’s savior?

Open floor plans don’t have to be horrible, argues Jan Hein Tiedema who’s the Executive Managing Director at EDGE Technologies; a company specialized in developing smart office buildings that promote workplace health. “One of the biggest challenges is dealing with noise. We have minimized disturbance by creating adaptable and multi-functional spaces.”

Plantronics creates such soundscapes. Plantronics was founded in 1961 and born out of mission-critical audio — they built the world’s first headset to help pilots operate their planes more effectively, and they were the ones who transmitted Neil Armstrong’s words back from the moon. However, as Plantronics migrated into a broader enterprise play and began trying to understand what the communication challenges companies faced they were inevitably led to office space design.

According to Beau Wilder, Soundscapes Manager at Plantronics, open offices just seemed to good to pass up upon their arrival because they were so cheap. “Everyone was interested in the cost savings and the potential for increasing collaboration and the speed of innovation. There were millions of dollars available for whoever could open up and densify the office.”

As they embarked on this new area of business, Plantronics decided to pilot the next generation open office themselves. They scrapped their existing HQ and spent 10s of millions of dollars building the open office of the future from scratch.

Unfortunately, Wilder and Plantronics found out first hand that the practicality of the open office did not live up to the theory.

“The initial reaction was: this is great. That was until people actually tried to work in it and then we had people organically abandon the space. The noise pollution was so extreme that although the office was a visually appealing place, no one could actually work there. As an acoustic company, this piqued our interest as you can imagine,” said Wilder.

It turns out the Achilles heel of the open office is noise. Research shows that because noise pollution is so bad in open floor plans, it causes productivity to drop by 20 percent and this, in turn, causes an unfortunate side effect: people can spend less time collaborating.

Plantronics decided to take this problem head-on. They realized that the problem is all about intelligibility —because unintelligible speech is no longer distracting. This is why people like working in coffee shops, the noise just become babble sound.

Plantronics went on a journey to solve this problem — they tried sound absorption material which was woefully inadequate and traditional sound masking which gobs of data showed raised employees cortisol and caused fatigue.

They didn’t find their answer until they stumbled on research on ‘biophilia.’ Biophilia is a scientific hypothesis that as ‘human animal,’ we are naturally inclined to be attracted to nature.

Research from the Finish Center of Occupational Health took aim at the workplace and disguising noise. Starting with silence as their benchmark, the researchers exposed subjects to music which was distracting, white noise which was fatiguing, and then to natural sounds. The natural sounds, and in particular the sound of water, were by far the most effective at disguising intelligible language and the most well received by subjects.

Plantronics has taken this research and the principles of biophilia into open office design. They built an audio system to bring the sounds of nature into the workplace, an intelligent grid — complete with a speaker and a distraction sensor in each zone that can detect and modulate sound depending on the location and level of a disruption. In addition, natural components such as waterfalls and digital skylights are incorporated to mimic nature even more.

So far it seems to be working.

“We tried using natural soundscapes in our space and had such a good response from clients coming into our office who wanted it for their own offices,  that we brought it to market a little over a year ago,” says Wilder. Since then, major companies like Microsoft have started using Plantronics’ Soundscape product.

To date, Wilder says their product has been able to diffuse the radius of distraction by 60 percent. The distance to which people could make out intelligible speech decreased from about nine meters away to four meters.

At the same time, in their own office space, they’ve been able to demonstrably improve the employee experience — workplace research agency Leesman ranked their Dutch headquarters in the top five in the world, showing that productivity and creativity went up 15 percent.

It’s too soon to tell if soundscapes can save the utopian open office dream. But they might drown out the watercooler chatter to a less annoying level.

This post is brought to you by EDGE Technologies, a company specialized in developing smart, high-tech office buildings that promote workplace health.