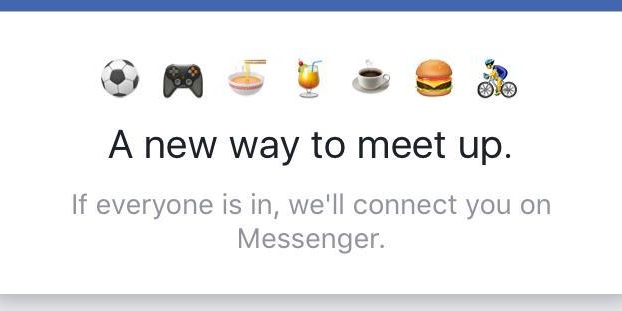 Facebook is testing out a new system to help you connect with your Friends by agreeing or refusing to meet up with them, Tinder-style.

Jacob Dubé of Motherboard tested the feature and compared it explicitly with dating app Tinder. It shows you a variety of Friends in Messenger who might want to meet up with you. You can respond with a Yes or a No Thanks, and you’ll be notified only if both parties answer positively.

The app will match you up with your friends, rather than with strangers, so it’s not entirely like Tinder — and thank goodness for that. As a Facebook spokesman told Motherboard, “People often use Facebook to make plans with their friends. So, we’re running a very small test in the Facebook app to make that easier.”

If you’re like me and keep a relatively trim Friends list, you might find it odd and intrusive that Messenger is trying to hook you up with people you already know well. Facebook might periodically swipe (no pun intended) features from other apps, but I don’t know if Tinder is one of the apps it needs to copy.

If you don’t keep in constant contact with all of your Friends, then it might be a treat to have a spontaneous meet-up arranged by Facebook’s algorithms. But I feel the same can be done much more expediently by opening Messenger itself and texting them.

Read next: Winding Tree is the new kid on the blockchain set on disrupting Airbnb and Expedia