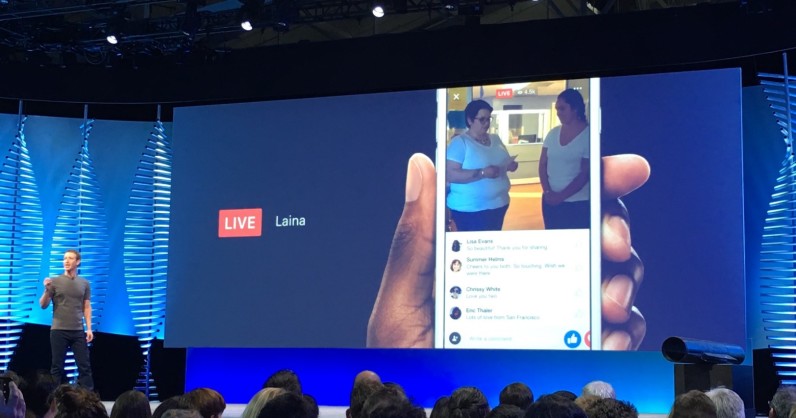 Facebook is waging an all-out war on Periscope. The company announced a new live video hub at its F8 conference today, which will live inside of Facebook.

The new live video feature will be displayed prominently on your Facebook news feed page. Live video streaming will be as it’s always been, with celebrities and brands going live in your newsfeed. On stage at F8, CEO Mark Zuckerberg says live video reach is often better than it is on traditional TV for celebrities.

In a sense, it’s a lot like Periscope, where you can stream video directly inside of Twitter. There will also be an open API for developers, so we can stream live inside of Facebook from a variety of other apps.

If analysts are right, none of it is meant for consumers. CEO of Manatt Digital Media Peter Csathy says “Facebook’s central focus is on professional news organizations, premium publications and social “celebrities” — those with existing mass reach.”

Csathy underscores the importance of video for Facebook, noting “with this launch, video is now front and (literally) center for Facebook, just as it is for YouTube, Twitter/Periscope, Snapchat and others. We now live in a world where mobile is the first (not second) screen, and mobile means video.”

Csathy also says the decision to keep the video hub inside Facebook was smart. “Facebook proudly announced that it offers financial incentives for those key publishers to make their live shots available on Facebook, so that Facebook can directly monetize them via ads on its own site.  And, for those publishers, they get new exposure to Facebook’s mass audience,” says Csathy.

Read next: Facebook is opening up its 'M' AI platform as a bot engine for developers