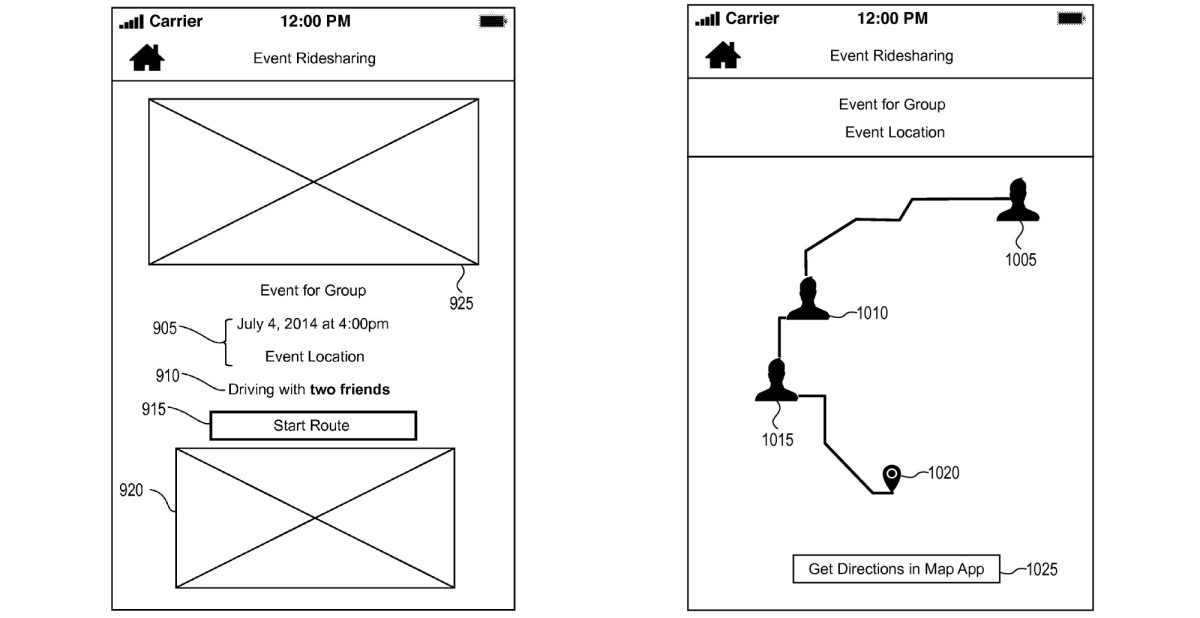 It might just be so, to an extent. Business Insider spotted a new patent that indicates the company is considering a ridesharing feature right on an event’s page.

It could be integrated right onto the events page through a new “Going and driving” selection where you’d normally mark whether you’re attending or not:

The site would then prompt ask you about how many passengers you could potentially carry, ask you to invite others to join, set your departure location, as well as set overall visibility for your invite. Drivers can extend their pickup invitations to friends only, friends of friends, all users invited, or other groups of people.

Alternatively, you could be the one to hitch a ride, in which case Facebook will let you know what friends might be able to drive you there. Interestingly, you could also choose to attend via transit, in which case the app will try to pair you with someone else taking public transportation.

It’ll then work a lot like your standard ridesharing app, showing you your driving route and who’ll be picked up along the way.

Although patents often just cover vague concepts for futureproofing and legal purposes, this one makes a ton of practical sense.

You’re likely to have some friends going to the same events you do, and carsharing could help people involved save money and time. Not to mention that 1.4 billion people using Facebook, it could just cut down on some pollution too.

And while events are fine and dandy (Facebook’s been putting in a lot of work to improve the feature), the concept could go so much further: imagine if the company eventually expanded the functionality to daily commutes too.

For all you know you might share a commute with several friends – or friends of friends – but you’ve never considered carpooling with them, or even have felt too shy to otherwise ask about.

Of course, there are plenty of carpooling apps around, but its Facebook’s ubiquity and familiarity that give it the best shot to eliminate the hassle and barriers – both mental and logistical – normally involved with arranging carpools.

Assuming people mostly limit themselves to riding with friends or friends of friends, it would intrinsically be immune to much of the risk and fear associated with other ridesharing and taxi apps. Despite any background checks and ratings system, those apps almost always pair you with a complete stranger.

Of course, there are some caveats. Mainly, do we really want Facebook to know where we live?

Probably not. Still, with the plethora of information the site already has on you – personal photos, check-ins, late-night statuses and the like – I’m not sure that a commuting program shared with friends and low-degree connections would pose a particularly strong added risk, given you’d have to opt in.

Plus, it could just be a nice way to make new friends; for once, you could actually use Facebook to see and meet people off of Facebook. Isn’t that the point of it all anyway?

Read next: Google's My Tracks activity tracker will shut down April 30