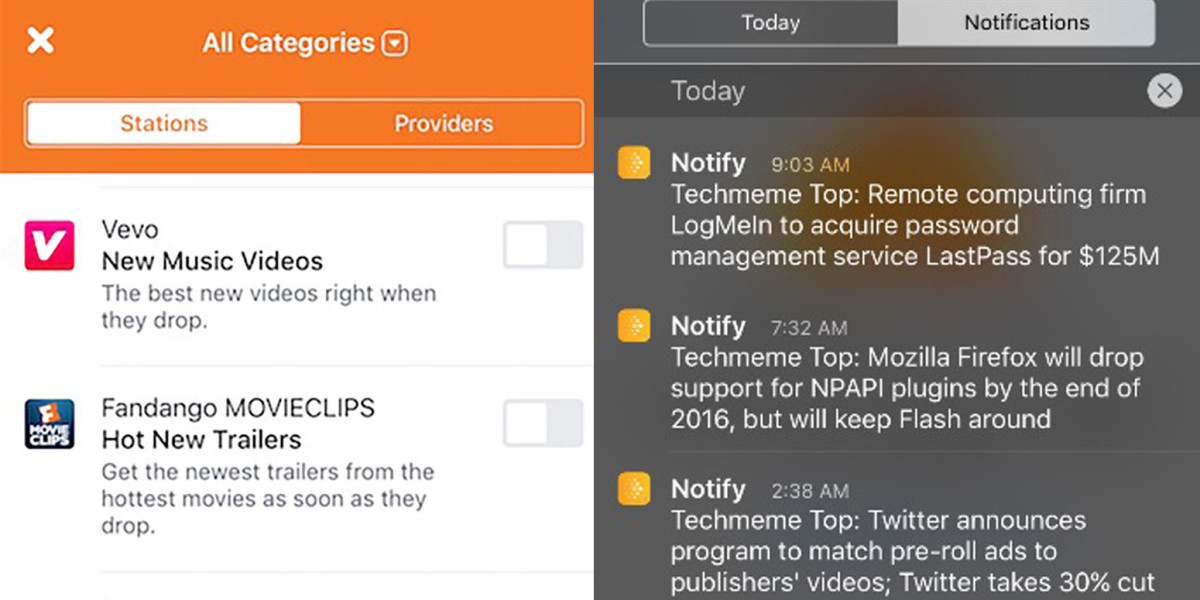 Though a ton of people already use Facebook as their primary source for news, Twitter still reigns king when it comes to aggregating news story as it happens.

That may be changing soon: According to a report by The Awl, an upcoming Notify app allows Facebook users to aggregate notifications from various publishers on recently posted stories or content. It means that – as on Twitter – people can access news in real-time, instead of just stumbling upon an article whenever it shows up on your feed.

The image above reveals a few details about how the app could work. Notifications options appear to be divided into both ‘providers’ (likely publishers and content creators), as well as ‘stations,’ which appear to be specialized collections of stories or content within each publisher (you can choose to just follow election news on Huffington Post, for example).

Furthermore, you appear to be able to set notifications based on different content categories. It’s also worth noting the image above doesn’t represent the app’s main interface, as the ‘X’ on the upper-left corner means the page is just a settings or configuration menu.

Your home screen will more likely be a feed of stories and content. Here’s how the notifications show up on iPhone:

As The Awl points out, people are already used to receiving notifications from Facebook and news publication apps, so Notify would simply be mashing these together. That said, it’s interesting that Facebook chose to launch this feature as a separate app rather than integrating the notifications more heavily onto its own platform; it’s hard to see how successful it will be without taking directly advantage of Facebook’s social traction.

There’s also no word on how – if at all – the app will tie into Facebook’s Instant Article platform.

Notify appears to be launching within the next month, and previous reports indicate that publications have been trying it out since at least August. We’ve contacted Facebook for more information and will update this post if we hear back.

➤ Notes from the Platform’s Edge [The Awl]

Read next: AT&T will soon roll out NumberSync, a network-based 'handoff' feature