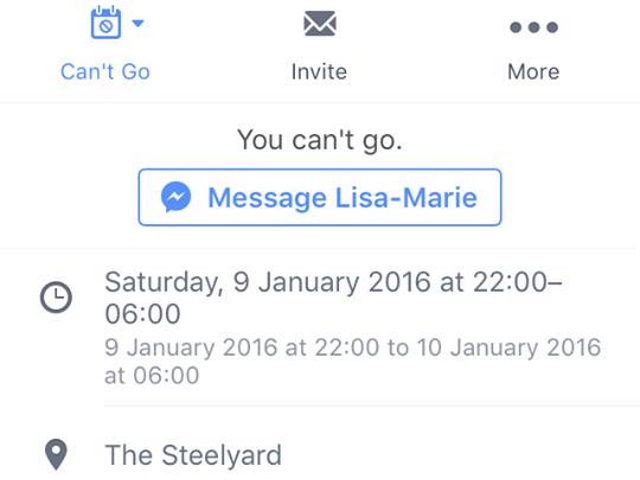 Last week, we learned that Facebook is rolling out totally unnecessary read receipts for event invitations. Now, it appears it also wants you to message the host when you’ve declined the invitation.

According to a tipster on AdWeek, after selecting “Can’t Go” on an event, a Messenger button appeared to help directly contact the host/inviter.

There’s two ways to look at this: You could give Facebook the benefit of the doubt since people often leave a message on the wall of the event page to explain why they can’t attend.

But for those who constantly get event invites from that friend who’s also a club promoter, or the struggling artist who’s showing up at every open mic out there, explaining why you can’t make it every time is both exhausting and super awkward. There’s only so many excuses to give before you downright tell your friend their poetry sucks.

It’s also Facebook’s way of still trying to get people to jump on the Messenger app for every tiny SMS that could possibly be sent, preferably via Facebook. LET ME LIVE, ZUCK.