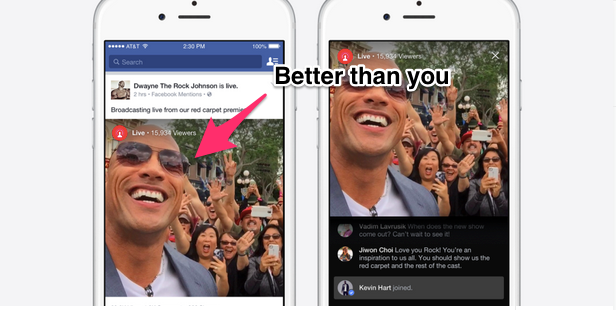 During the mod era of the ’60s, there was a name given to the coolest mods, the ones with the best suits, the most enviable moves on the dance floor. They were called “faces,” hence Rod Stewart’s old band The Faces and the far superior Small Faces.

Why am I educating you about the dusty history of a British youth culture movement? Because Facebook’s latest moves got me thinking about the idea of elites and cool kids.

In case you missed it, Facebook got into the livestreaming game yesterday with an update the will allow celebrities and ‘notable’ people on the social network to broadcast.

The move got the usual suspects frothing with excitement at Zuckerberg’s latest genius strategic move – as if the company hasn’t had a series of ‘me too’ apps that failed in the slip stream of other first movers (remember its Snapchat competitor?).

Robert Scoble took to – where else – Facebook to share his thoughts on the development. And, as is quite common in the prognostications of this tech industry nabobs (practically all of them middle-aged white dudes), he found plenty of ways to subtly throw shade at the ‘normals’:

If Facebook turned live video on for everyone we would be slammed with crappy videos from our friends, who barely know how to hold an iPhone properly during video, much less are skilled at creating something that we all want to watch…

Oh, you normal people with your flipper hands, ruining the Web with your carelessly created video slop. Behold! Our new Facebook VIP section where those who have the immense IQs necessary to operate modern smartphones will be able to broadcast their gilded genius to the proles.

By contrast, just as that Facebook note was published, I was on FaceTime with my 80-something-year-old grandmother.

Scoble is right to say that Facebook’s challenge is “[keeping] the noise level down” but the subtle elitism about the abilities of normal people to create interesting ‘content’ is belied by YouTube, Vine, Snapchat, Reddit and a thousand other places online.

There are other factors to Facebook restricting its streaming to celebrities right now. It wants to lure them away from Twitter (it has done for ages) and it’s desperate to cut Periscope off at the knees. It wants to make itself a true competitor to YouTube as the place where prominent people drop their new clips. It knows it could take on Twitter’s place as the key news source for influencers if it can nail live video.

Also being fair to Scoble, he makes another couple of very good points – Facebook isn’t transparent enough about how and why people are verified on Facebook (“Better explain how people get verified and/or kicked off the system.) and there should be a feed where you can see everything (“…you would see every like, comment, post, video stream, and other stuff, from your friends, scrolling by in real time.”)

Over at TechCrunch, Josh Constine, who is an unstoppable machine when it comes to Facebook scoops, was predictably excited about the livestreaming news:

If Facebook can use the same reach that attracted celebrities in the first place to invade live streaming, it could create tones of compelling video content to fill its feed and mask its ads.

While some users might be bitter that they can’t stream on Facebook Live yet, it could actually prevent users from getting sick of the feature. Periscope and Meerkat are plagued by users sending crappy ‘Hello world’ or ‘Here’s my breakfast’ streams that annoy their friends with notifications. Letting only celebrities use it first could teach users when they have a moment worth streaming.

There. There you have it. We require celebrities to teach us what a worthy moment is. They, those golden gods, can lift us beyond the banalities of our mundane existences and into the elysian fields of promoting dubious weight loss supplements and weird cults.

I have written critically about Periscope in the past – partly in response to the hyped up coverage of the app produced by lots of journalists in its early days – but I can’t see the presence of videos by ‘normal’ users as a plague. The point of the Web used to be about experimentation and freedom. Now so many writers and commentators seem to crave for the platforms to stamp on that and impose cleanliness and order.

Facebook is Mark Zuckerberg’s garden, he and Facebook’s engineers can prune it however they like. But don’t try to tell me that celebrities are truly special flowers whose thoughts bloom more creatively than the rest of humanity. Livestreaming on the platform will role out to all of us eventually. In the meantime, I don’t think the ‘faces’ are better or more interesting than you.

Read more: Facebook takes on Periscope and Meerkat, but only celebs can stream

Read next: Twitter's new email bug is stating the obvious and annoying users