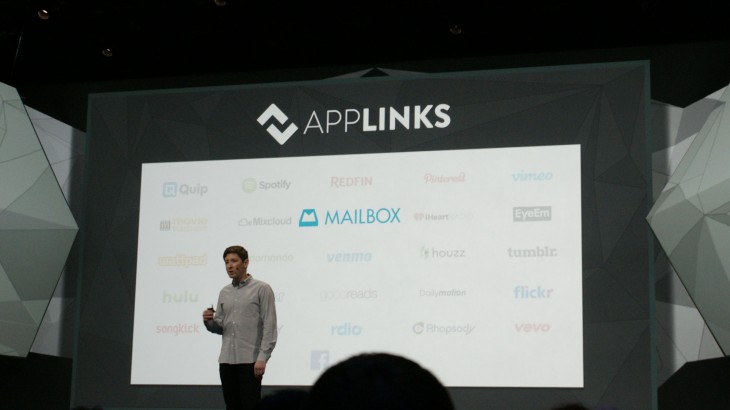 Earlier today at F8 2014, Facebook unveiled App Links, a new open standard for deep linking across different mobile apps. The official App Links website has yet to go live, but it will eventually be located at AppLinks.org.

Mobile apps are the future, but, up until now, the increasingly siloed nature of the ecosystem has been its biggest weakness. The interconnectedness of the Web – its webbiness – helps keep it open and serendipitous as we jump from page to page. The mobile platforms themselves have tried to implement deep-linking into their own products, but Facebook believes it’s in a unique position to push for an open app linking standard because it’s a “cross-platform platform,” as CEO Mark Zuckerberg said today during his keynote.

Apple, Google and Microsoft have all established their own platforms across mobile and desktop, leaving Facebook in the position of having to sit on top of the OS layer and act as a bridge between iOS, Android, OS X, Chrome OS, Windows and Windows Phone.

At launch, App Links has signed on the following developers to use its standard:

To learn more about what Facebook has planned for the new standard, we spoke with App Links Product Manager Vijay Shankar:

VS: We want to build an open standard for app-to-app linking. If you’re a mobile app and you want to link a piece of content to another mobile app, it’s a lot harder than it needs to be. The challenge is because there is not a single consistent way for people to let you know if the content within that app is deep-linkable. The other challenge is, given the number of platforms we have, there are a lot of existing solutions that are there, but there’s not a good cross-platform solution that works across iOS, Android and Windows Phone.

Why do you think it took so long as an industry to get to this point? Why hadn’t someone done it before?

It’s a hard problem if you think about it, right? One is, there are various solutions that exist, and usually, if you think about it, iOS was a big platform four or five years back, and then Android kind of caught up. So, there are platform-specific solutions that came up, but there is not a single, good cross-platform solution. That’s why I think Facebook is in a good place to make this happen, because if you think about Facebook in general, we sit across all these platforms. We are kind of a horizontal layer. We believe we’re in the best place to build a standard that’s truly cross-platform and move this initiative forward.

And, another thing if you think about mobile, is the number of links that come through Facebook – Facebook is one of the biggest drivers of linking mobile traffic in general, and we want to provide people a good experience when they consume content in our apps, so that’s how we began tackling this problem and we wanted to fix this in our apps. Once we did that, we figured, “Hey, this is such a good solution, other apps can take advantage of this as well.” And then, we said, “This should be open source, and this is something that any two apps should be able to do.”

What does Facebook get out of it? What’s in it for you guys?

I think it’s a better mobile ecosystem. Today, for you to get from A to F, for example, it’s hard. You kind of drop off after a couple of levels because it goes to mobile Web or you’re forced to log in. The Web is what it is today because of linking. We think the same thing happening for mobile will lead to a better mobile ecosystem, which is good for everyone that is on mobile, and we are a mobile-first company. This is going to make it good for all players.

Over the past few years, there’s been a division growing between the Web and apps. Do you think App Links bridges that gap to make the app ecosystem much more like the Web?

I think so. One of the neat things about App Links is it considers all platforms, including the Web. There are certain things which are better done on Web, and there are certain things which are better done on native. You as a developer, you know what’s best for your app, for your piece of content. So, the way the standard is set up is you can define the fallbacks. You can say, “Hey, on this platform, on this device, I want my users to consume a piece of content here.” So, this gives you the full flexibility. I think we should not force a certain piece of content or how links work to certain platforms. It should work across everything, everywhere. You should be able to link anywhere.

As your team created this as a standard, was it easy to get partners on board? Did developers understand the need for this?

They were. We have more than 25 impressive apps we have partnered with at launch. Over the last 12 months or so, this problem has started to become bigger and bigger. Everyone knew this was a problem, and so we just needed to find a solution that worked well that was simple and cross-platform. So, once we were able to define what developers cared about most and put together a solution, we started talking to partners and everyone wanted to just jump in. At the end of the day, this is going to make the engagement and experience for users in their app much better. Why wouldn’t you want to do that?

Are the platform stakeholders on board? Have you talked to Apple, Google, et al.?

We haven’t directly spoken to any platform in general. What we’re trying to do is build a solution that works across all platforms and just hope it takes off organically by itself.

Speaking of Facebook, don’t forget to like the TNW page to get the latest stories and news from us.

Read next: How Facebook's Audience Network will serve relevant ads without sharing your information