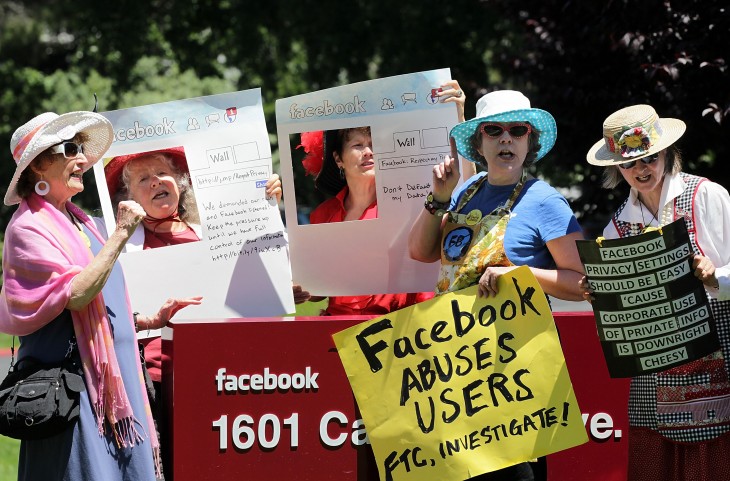 Before the Thanksgiving holiday, Facebook announced that it was going to do away with its four-year-old process whereby the service’s 1 billion users could vote on proposed privacy and usage policy changes. With this move, it had hoped to share user data with its affiliates like Instagram. However, before it goes forward with any changes, Facebook should probably read a letter from concerned consumer groups, who are urging it to steer clear from any changes.

Okay, now I know we’ve all heard this before: Facebook makes changes to site, and groups start sprouting up and protest the changes. This happened before with the News Feed, each redesign, and practically every other instance of the company touching the site. But with the privacy policy and data usage changes that the company is recommended, concerned users are claiming that by doing so, it could violate an existing settlement it has with the United States Federal Trade Commission.

As reported by the LA Times, two groups, the Electronic Privacy Information Center and the Center for Digital Democracy, have written a letter to Facebook CEO Mark Zuckerberg claiming that these changes would “invade the privacy of Facebook users and ‘implicate’ the terms of the privacy settlement Facebook reached with the FTC.” You might remember that in November 2011, it settled over its use of data with advertisers even after reassuring them that it would be kept private. After an eight-count complaint was issued, the social network settled and agreed to independent third-party audits for the next 20 years.

So while the choice is supposedly up to the users of Facebook, one thing that Zuckerberg might want to think about before pulling that switch is the effect it will have on those who are really paying attention to the privacy settlement. Right now, any move that it makes will be well scrutinized — European regulators are going to comb over any policy changes and expect the company to give its citizens the right to opt-in or out. Irish regulators are also examining the impact these proposed changes are going to have.

Both consumer groups state in their letter that the settlement prohibits the social network from “misrepresenting the extent to which it maintains the privacy or security of covered information. Additionally, prior to any sharing of users’ personal information with a third party, Facebook must make a clear and prominent disclosure and obtain the affirmative express consent of its users.”

While the company says it wishes to share the data with its affiliates, it’s pretty naive of us to think that this wouldn’t be used to better target advertisements at the users. And I’m sure that any opt-out policy will be located in the settings section of Facebook — now the trick is to find it.