The Digital Life Design conference (DLD) opened up this morning with a panel discussion between media heavy weights and tech giants around strategies for the future.

Gaming was seen as a real player that has changed from a niche activity to a mass market phenomena. Gaming takes up twice the time of video consumption in most markets.

Dmitry Grishin says that gaming has cinematic qualities that will help it catch up with film and TV consumption. He says that games are now so realistic and we are already watching movies like Tin-Tin which is very close to the animation experience seen in games.

Grishin says that the mobile market is spurring on the growth of games. He noted that in the US around 50% of users have smart phones while in Russia it is roughly a quarter and that games take up a lot of time for mobile use.

But he also offered caution in entering the games business as a sole pursuit. “If you are just in the gaming business it is dangerous. We see that combining communication and game production means that social media provides the audience and gaming gives you an opporunity to create good content and deliver it together. In the history of gaming, there is no leader in the market for so many years. In the 70’s people thought Atari would lead the world, but now I don’t know if people know that name anymore.”

Overall, most of the ways we can consume media have changed radically. The music industry is wildly different and print has taken a huge hit due to the arrival of digital media online.

Ahmet Özer took up this area of the discussion. His company Trader Media East is one of the largest publishing groups in Russia. He acknowledged that the change is invitable. “Like every other traditional media company we are facing this transformation.”

He sees the changes in traditional print media in three stages. The first is a sense of denial and resistance to change. The second is where companies adjust to speed of change and balance the traditional business and rising digital actions. The third stage needs a lot of commitment, “This is where you transform the business yourself”, says Özer. “You have to make moves in advance and make some radical decisions. We are at this stage. We shut down some of the print publications while they were still profitable. But you have to show how commited you are to transforming yourself without waiting for customers to force you to change.”

Twenty-five percent of Trader Media East’s revenue now comes from digital media. Özer says that by 2015 it will be more than fifty percent, “After 2015 we will be more of an online player than traditional media.”

Through print media, the company had a reach of 2.5 million per month. Through digital means, the company has increased its reach to 15 million. That’s a heck of a boost to an audience and a sharp message to media organisations hanging on to the old ways.

For Burda, the digital business unit was the most important contributor. Paul-Bernhard Kallen noted that when turning print content into online content, you turn dollars into pennies and the costs are seldom covered.

“We have to change that in the future and give more space and creativity to digital advertising. Up until now we have not done that, Kaleen says. “We decided that we wanted to follow the customer as far as possible on its way to transaction.”

Burda provides a service that publishes information about holiday destinations called HolidayCheck [DE]. It’s the largest German-language holiday portal for reviews on travel destination. The portal provides a great deal of information which in turn, leads to transactions.

Kallen says that strong brands can also create better revenue, “In Germany we have a news magazine called Focus. It holds a lot of trust with its readers and this trust creates traffic. This trust leads to places where you can organise transactions. For HolidayCheck it was of paramount importance that we have that traffic support.” 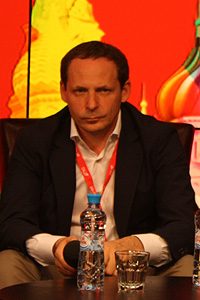 For Yandex, being a search company means that ninety-eight percent of revenues are ad based. Even with such a high figure, Arkady Volozh is not worried about projections for growth. “If you look at the money the Internet creates, if you exclude the areas where the Internet is just a facilitator; for example if you order tickets online, it’s not ‘online flying’, it’s just your ticket. If you put that ecommerce aside and look at the value on the Internet it’s just three main areas.”

The areas Volozh defined are communication and content consumption where a user buys a device and pays for access. The money generated globally in this area is in the hundreds of billions of dollars.

The second area he outlined is online advertising. The total money generated is measured in tens of billions of dollars and the majority is in search advertising.

“The third kind of value online is by all kinds of subscription services, newspapers, buying books or music,” he says. “That sector is even smaller. It’s measured in billions of dollars. We are in the middle range here for online advertising and we feel safe that there is room to grow. Ecommerce is not the same, it is an online transaction for the offline world, the Internet is just a facilitator.”

Volzh has good reason to feel comfortable. Digital is the fastest growing advertising sector, even though it is not moving at the pace it once was. “We’re slowing but we are still at forty percent growth rate,” says Volzh. “In Russia advertising on the Internet will exceed several billion. This year, we are already starting to count in billions.”

For visitors to Moscow from other countries, Volozh had a wider picture of this alternative tech region running from Northern Europe through to Israel. He noted that this part of the world is the origin of products like Skype, Opera and the search company, FAST.

“Here in Russia you have the two most valuable public Internet companies. There is not too much technology being created in the rest of Europe,” said Volozh.

“Three examples created in Russia are now used globally,” he continued. “The cheapest way to send something into space is through Russian rocket science. Everyone is used to using geolocation or global positioning systems and if you do, you benefit from the second GPS, which improves the quality of positioning on Earth. The third example is search. There are only six global search companies. Within the top there, two are based in the US and the third is Yandex.

“Russia is a place where a lot of technololgy has been created in the past and is continually being created now.”

He’s not wrong. The sense of ambition, creativity and pride in technology is evident at DLD and rightly so.

As the market here changes and speeds up, it is fairly certain that Russia will start to make the leap to other markets with its new technologies.