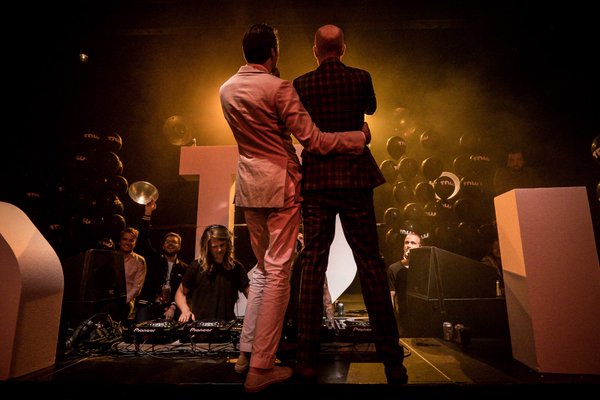 We had a great event last week here in Amsterdam, with amazing speakers, a very excited crowd, a festival atmosphere and a party that was impressive even by Amsterdam standards. There were also a few embarrassing moments which are just too much fun to not share with you.

Well, I guess me and Pep Rosenfeld took that a bit too literally and joined the brass band onstage for a dance on the morning of day two of our event. The resulting GIF is a great example of why you should stop dancing when you turn 30:

.@peprosenfeld and @Boris have got that #TNWeurope Friday feeling 💃🎶😎 pic.twitter.com/ONXoaH2jsC

… but @peprosenfeld wins with this special dance move on stage at #TNWEurope 💃 pic.twitter.com/EMX0Cw31Is

…or to ignore everyone and to keep dancing, which is what I’m going to do.

Earlier that day I was talking to someone who offered me some wine. I looked at the label and recognized myself! I pointed it out and was met with blank stares. Nobody believed it was me:

What a ride! Time for another drink. #TNWEurope @Boris pic.twitter.com/IcpeQH3TdJ

But yeah, that’s me!

And this was also me. I was so tired at the end of the day I sat down and closed my eyes for a minute. I was quickly joined by a group of excited guests who wanted to do a group portrait. That led to this:

The absolute winner of awkward moments was the following incident at the end of our afterparty. We were delighted to have the world famous band Kris Kross at our party who were going to end with their hit song ‘Sex‘ at the end of our ‘thank you’ speech.

That song has reached 100 million plays on Spotify, and we knew it would be ending the party with a bang. So me and Patrick got on stage, I thanked everyone, and then Patrick dropped an obvious hint to get the song started. It didn’t, so Patrick figured he had to be very very very clear in making his point:

One of the more embarrassing moments at #TNWEurope when @Patrick announced a song, and it never started… pic.twitter.com/sTbVijSkiv

…unfortunately there was a problem with the audio system, so the music never started. And that left him hanging there, with nobody understand what the hell just happened. That didn’t matter much to Kris Kross though:

@TheNextWeb best conference people to play for ever! 🔥🚀#thenextweb

And lastly here are a bunch of visitors to one of our parties trying to embarrass themselves with a GIF made in one of our Social Photo Booths. Make sure to watch that GIF page with this song playing in the background for a great effect. Here’s one of me and Juan Buis that clearly shows how well respected I am around the company:

So yeah, awakard. But we don’t care. Our conference experience is better than taking drugs. Really:

Did I miss something? Share your own awkward memories in the comments.

Read next: Why relying on your memory could compromise your security