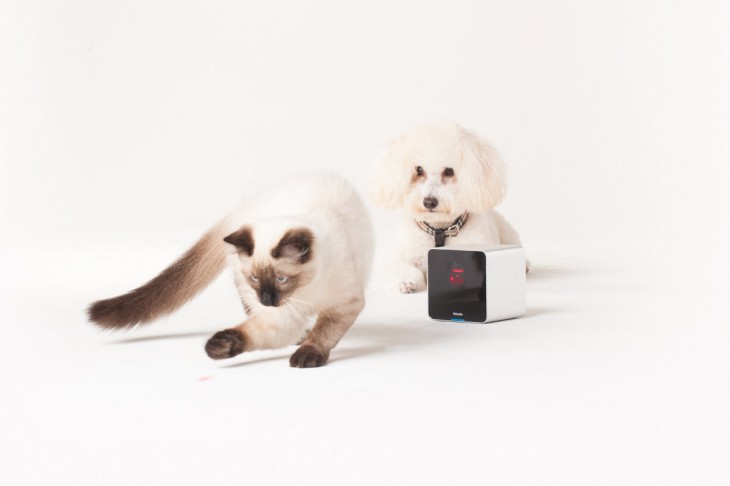 Kickstarter-backed Ukrainian startup Petcube has announced the beginning of shipments of its combined HD webcam, speaker and laser pointer that lets pet owners play with their furry (or sometimes hairless) friends remotely. Starting from today, the device is available for order on Amazon, Fab.com, and the startup’s own website for $199.

“The first run of shipment is pretty big, much bigger than the number of pre-orders on Kickstarter,” Petcube CEO Yaroslav Azhnyuk told The Next Web.

Explaining the problem solved by its gadget, Petcube cites research showing that 60 percent of American households own a pet, while 20 percent of them leave the TV on during the day to keep them entertained. With remote access to the Petcube installed at home, owners can use apps on their Android or iPhone devices to check what their pets are doing, talk to them through the speaker, and play using the built-in laser pointer that is safe for animals’ eyes.

In addition to the core hardware features, Petcube lets users take photos of their pets and post them to its own platform and popular social networks, as well as share access to the device with family, friends, or the whole internet. In practice, this means that users can make their Petcube public for 15 minutes, or give a group of people access for certain hours of the day – or even share a Petcube with someone permanently.

Public Petcubes are also expected to appear in animal shelters across the US, letting prospective pet owners play with cats and dogs, and, on the other side, give the shelters’ four-legged tenants some badly-needed fun and interaction. At least one cat shelter in San Francisco already has a Pectube installed.

The news should bring much joy to about 2,000 of the project’s backers, who waited six months longer than expected but will still get the gadget in time for Christmas. Delays aren’t abnormal with Kickstarter-hosted projects, however Petcube, which has offices in San Francisco, Kyiv (Ukraine), and Shenzhen (China), seem to have met more obstacles than most.

Already lagging a few months behind the schedule because of manufacturing issues, the startup then suffered another painful blow at the end of October when its Chinese camera supplier filed for bankruptcy, which led to another month of delays for the final product.