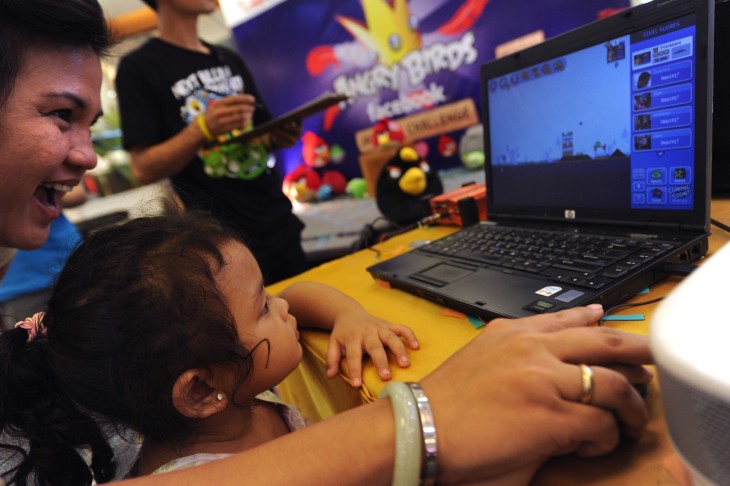 A few weeks ago at Le Web Paris 2012, I had the pleasure of moderating a panel with two founders of rapidly growing social and mobile gaming companies, along with Julien Codorniou, who is in charge of European gaming industry partnerships at Facebook (video embedded below).

One of the things Codorniou said during the panel discussion was that fledgling European game studios – as well as older, more established and often previously Web-focused gaming companies who are increasingly shifting their attention to social and mobile platforms – are growing tremendously fast in terms of users and revenue these days.

In fact, his team has ballooned from 2 people a year ago to 22 people today, and the company plans to expand it with more employees in 2013 to more efficiently cater to European gaming companies.

That grabbed my attention, and got me thinking.

A lot of the gaming companies that are firmly on my and my colleagues’ watch list are indeed located, or were founded, all across Europe.

That they’re thriving and often punching way above their weight isn’t really a new phenomenon, although 2012 has definitely been a breakout year for many of them, and 2013 promises to bring more of that.

If you’re prone to wasting time playing casual games on Facebook, your iPhone or Android smartphone, or your iPad, there’s a good chance many of the games you’ll play next year were made by European social and mobile game developers.

What I haven’t been able to figure out so far is exactly why European gaming companies are performing so well.

Furthermore, everyone I asked that very question over the past few weeks seems to have a different answer (see further down).

Be that as it may, it’s one of the things I strive to better understand.

A recurring answer is that the rise of Facebook as a truly global platform with a billion active users and counting, as well as the continued increase in worldwide smartphone penetration, have enabled European social and mobile game developers to compete with the best and largest of them.

No doubt about that but, then again, the playing field has been levelled for everyone, so there must be more to it.

The list of European gaming success stories is long, and diverse

Look at the likely tech IPO candidates for 2013 today, and you’ll find companies like Angry Birds maker Rovio Entertainment (Finland – see our profile on them), King.com and Mind Candy (UK) and perhaps even Game Insight (Russia) or Wargaming (Belarus). Some of them are already listed, in fact see France’s IsCool Entertainment.

Look at today’s venture capital-backed, up-and-coming mobile and social gaming startups that are climbing up a variety of charts – Most active monthly users! Top rated Facebook games of the year! – and on that list will be companies like Wooga and GameDuell (Germany), Social Point (Spain), Cut the Rope maker ZeptoLab (Russia/UK), SongPop developer FreshPlanet (admittedly based in New York City but founded by French serial entrepreneurs), Supercell (see our profile on them) and Grey Area Labs (Finland), Peak Games (Turkey) and Dragonplay (Israel).

These are companies that are battling large, publicly-listed companies like Zynga and Electronic Arts in the space, with some of them gaining ground and some of them already kicking their butts in some regards.

Even the bootstrapped game developers are being followed very closely by everyone with half a brain in the gaming industry: from Talking Tom maker OutFit7 (Slovenia/Cyprus) to Top Eleven developer Nordeus (Serbia), WallaBee (UK) and Kiloo (Denmark).

Russia and Israel have proven fertile ground for successful game development companies too.

You may have never heard of gaming firms like Plarium (see Reuters’ profile), Diwip, Social Quantum Online, Murka or KamaGames, but chances are slim the same will be true at the end of 2013.

Examples aplenty, and I haven’t even mentioned the ones that were acquired by US giants – Playfish by EA, for example, or Playtika, an Israeli/Eastern European social casino games maker that was snapped up by Caesars Interactive Entertainment. Or the fact that there’s actually a startup accelerator in Estonia dubbed GameFounders that – you guessed it – exclusively backs fledgling game studios.

Remarkable, especially when you consider how quickly some of these companies have taken off. Moscow-based Game Insight was started in late 2009, and it expects revenue to climb to $100 million for 2012.

Another example is FreshPlanet, founded only 3 years ago and already behind the top user-rated game this year, SongPop.

So, yes, European gaming companies are clearly doing something right.

But what is it? Why are most European technology startups having difficulties competing against their US counterparts – let alone the incumbents – while gaming companies from all over Europe are sprouting up or refocusing their efforts and taking rivals from other parts of the world on, head first? Might there be something in the drinking water?

I pinged a handful of people with broad and deep knowledge of the global digital gaming industry to collect their thoughts, in order to better understand why European companies seem to be kicking ass and taking names in the sector these days.

Facebook’s Julien Codorniou, for one, says the overall market is increasing in size, but he’s also witnessed European gaming companies climbing the charts at a rapid pace in 2012.

“A year ago, there was only one European company in the top 10 game developers building on Facebook.com, now there are 5 and 50% of the top 20 is actually coming from Europe. European game developers are gaining market share, but the size of the market is also expanding (+8% of overall gaming MAUs since January).

Companies across Europe (including Finland, UK, Germany, Russia, and Israel) are uniquely positioned to leverage the Facebook opportunity (on Web and mobile) thanks to the local pool of highly talented developers and designers and the string investments from the local business angels and VC community.

Just in the last year, Accel invested in Supercell and Dragonplay and Idinvest, invested inPlumbee and Social Point.

In the UK and in Israel, by example, some very fast growing companies have been created by exerts in real money gaming (Plumbee, Slotomania) and the Russian gaming developers, who use to uniquely target local networks are now betting on Facebook and mobile (and they know how to build good games) .

Plarium and Playtika, for example, started on VK.com and truly exploded when ported onto Facebook.”

Jens Begemann, founder and CEO of Berlin, Germany-based Wooga, thinks European game developers are simply more patient, and that the concept of ‘home markets’ doesn’t apply to the gaming industry.

“I think the European mindset of a number of social game developers is to put more of a focus on long-term success. Some US companies look for short-term, immediate success, and I think what we’re seeing now is a string of European companies now finding success with this more sustainable, long-term approach.

It used to be that the company with the strongest and biggest home market found global success. For most industries this is still true but for games, especially social games, there is no home market per se. The global market is completely accessible for everyone thanks to Web and mobile platforms, and the playing field is level.”

“Despite giving birth to countless technological innovations, the Western world neither invented nor saw coming probably the most impactful innovation in gaming: free-to-play.

The concept was born in the East and slowly spread towards the West. Europe adopted to and benefited from this new way of gaming a lot sooner than the US. Over the past decade, while the US has been struggling to adapt from building package games to games as a service, Europe has been enjoying a flourishing free-to-play ecosystem.

I believe this is the primary key to Europe’s success. Not to mention, how Europe turned talent from disadvantage to advantage partially thanks to platforms like Facebook and smartphones, where you don’t need big teams to develop great games.

Honestly, I think this is only the tip of the iceberg, there’s much the European gaming community has yet to show us.”

Michael Kalkowski, co-founder and managing director of Germany’s GameDuell, has great thoughts on the subject:

“I would say European game companies are not per se better than their US counterparts but many have been catching up in terms of processes and innovation in the last 3 years. This explains partially why more European games companies are being seen on the international radar. Before they have simply been underrepresented.

More and more European startups now have a strong “Silicon Valley-style” entrepreneurial culture and use state-of-the-art agile processes, tools and technology. And they finally focus much more on great user experience and interaction design. Northern Europe, especially Scandinavia and Germany, also have very good education systems for engineers, and there’s a growing network of experienced game designers, e.g. many of Supercell’s employees are former Digital Chocolate.

Another reason is the fact that the US market has been strongly consolidated (= less American games companies) through M&A, especially by Electronic Arts and Zynga who bought almost all reasonably strong social game developers in the US pre-IPO.

With the disappointing IPO track record, it is not surprising that Zynga is consolidating at the moment and does not hit off the next wave of buying. In Europe on the other hand, there are still many smaller and mid-sized players on the market. Interestingly, now, with the rise of mobile, European game companies really do have an advantage because we have had a strong mobile tradition for many years, in particular in Scandinavia, Italy and Spain.

The social games industry is special due to the important role of Facebook for growth, at least before the shift towards mobile. While the first wave of growth on Facebook happened in the US, now international is the main growth area and many European countries are still growing and have not reached the Facebook usage in the US. And European game makers understand the different European user segments better.

We at GameDuell realized that there are specific differences in user preferences across the globe. We felt that we have to adjust our product to the US audience, once we decided to enter the US market, much more than we thought. Likewise we are doing this for our various European offers and it also affects the way we do marketing.”

Whatever it is, it’s a development that we’re going to be watching closely in the next year. It also means I’ll get to play even more games in the name of journalistic research. Yay!