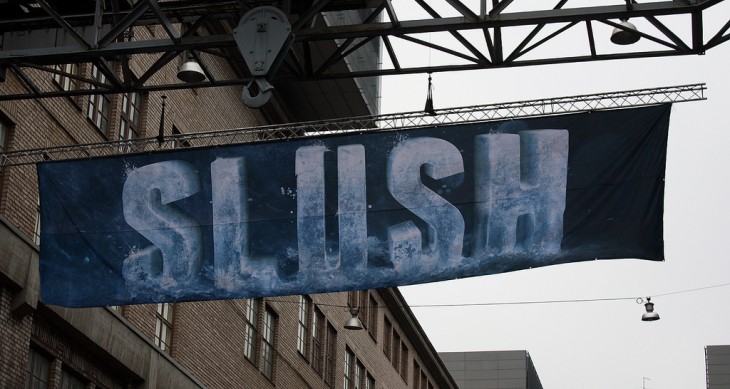 The Slush conference took place in Helsinki last week and saw not only local talent and startups showing their wares but also this time a number of international visitors and presenters speaking on the main stage.

Slush started in 2008 when a small group of Finnish entrepreneurs were hoping to get the scene together annually. According to the event website, it now brings more international investors and media to the region than any other gathering.

Past events have been relatively local affairs where startups could share with each other and get the startup ecosystem going, but this year a far more international flavour emerged.

Arctic Startup is one of the few news sites to focus on the region specifically. Dmitri Sarle, BizDev Artisan and Greg Anderson, the site’s Editor were naturally both at Slush to keep an eye on news from the event.

Sarle noted that the scene is rapidly changing. “Back when Arctic Startup just emerged as a blog, there was nothing here. There was pretty much no startup scene. So Arctic Startup and companies like us, started to bring that scene out bit by bit. Helsinki is like a central hub now where people meet all the time. But in other countries like Sweden for example, that’s still not as popular. We really have to go out there and get news out of them.”

You’ll probably know that the Nordic and Baltic regions gave birth to important technologies we use every day including Linux, MySQL, Skype and Git. Nokia and Rovio have been headline-making companies in the past and now fresh startups are starting to push into the public eyeline.

In the past there has been a humble characteristic to the region which means that extraordinary things may be happening but founders and engineers are less likely to shout out about it.

Uldis Leiterts, co-founder of the data visualisation startup Infogram notes that this is starting to change as the global audience starts to recognise the talent in the region.

“People are humble,” he says. “You could meet a guy here who looks at the ground when he says he sold his last company to Google. People here are basically very skilled, and they know how to deal in business.”

Anderson and Sarle agree that events like Slush help to boost the region and highlight the work that emerges. “There’s an education process that needs to be done here,” says Anderson. “There’s a lot happening here and people are now finding out that companies like Spotify and Rovio are from this region and not assuming it’s all from San Francisco.”

Anderson also says that the support of the Aalto University and Startup Sauna is going a long way to raise voices and get companies recognition on a global scale. “They’ve helped to encourage entrepreneurs and show them how to pitch with the level of excitement that gets investors and media excited. You see so many presentations where it’s an awesome product but just an awful pitch. ‘A boring Finnish pitch’. Aalto and Startup Sauna focus heavily on the pitch and I think that’s a great thing for this region.”

Aalto has been pushing entrepreneurship through its curriculum. The University was established in 2010 after merging the Helsinki University of Technology, the University of Art and Design and the School of Economics.

“I’ve heard someone say that if your university has an entrepreneurship degree, it’s not a good university because all the good universities like Stanford, Harvard and so on, everything is geared toward entrepreneurship in your day-to-day classes,” comments Anderson. “The universities here have created a huge amount of hype and greased the wheels to make this scene happen, without Alto entrepreneur society and Startup Sauna, I don’t know where Finland would be today.”

Although the humble nature of startups in this part of the world might seem as though it would have a negative impact, it has not stopped international investors and businesses coming to events like Slush to spot talent and companies.

Leiterts says that he has seen far more international traffic arrive in the area but that so far there has not been a risk of brain-drain. “For the last three or four years I have seen a lot of people coming here from Israel, Russia and the United states, just to work for the local companies here,” he says. “Sure there are people joining the global companies but there are also a lot of people coming here.”

So why are the Baltic and Nordic regions creating such amazing technology? Uldis Leiterts has a theory; “We are at a conference called Slush, it’s the weather that is taking people inside. That develops amazing engineering skills and startups, I think it’s interconnected,” he grins.

Indoors or out, the startup scene in this region is growing. In fact the companies, presentation areas and attendees barely seemed to fit inside the former cable factory venue.

Next year is expected to be even bigger for Slush as more startups find their groove and push for global recognition. As it continues to grow it will no longer be the regional gathering for local companies to network, but a strong platform for an increasingly innovative space that is showing America how to get things done in the cold.

Read next: 10 Startups, 13 Intense Weeks: The teams grill each other as 3 demo days loom