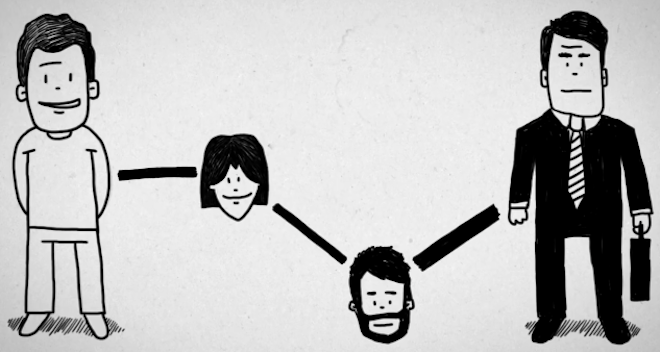 Off the top of your head, could you name the best way in which you could get in touch with Chris Sacca for a business deal? How about Chamillionaire? What if you just wanted to find someone to play some football with in your network? While there are millions of connections that we have spread across numerous sites, there hasn’t been a very good way to interpret those connections in a meaningful way.

Today, on the stage at TNW 2011, Wosju is changing the way in which you will connect to people. Instead of a simple “you follow” or “you don’t follow” method, Wosju goes into the analysis of sentiment in conversations between you, the people to whom you’re connected, and the people with whom you want to be connected.

In other words, you might follow Chris Sacca on Twitter, but Wosju can show you the best line of your connections to access in order to speak to him about business. In part, Wosju is bringing the degrees of connection feature that LinkedIn has mastered and applying it across your entire social network.

Wosju has been in a private beta for a few months. What we heard today is that the company is opening up and aggressively growing its beta membership, so head over and get signed up for an invitation before the floodgates close. We got a sneak peak at the mobile app version of Wosju, but the API (and how third-party sites will use it) is what’s truly exciting.

Wosju’s connection scoring and context tracking are some of the most exciting things that I’ve seen in social networking to date. Have a look at the Wosju demo video and let us know your thoughts in the comments before checking out the rest of the TNW 2011 Startup Rally.

Read next: Use Hitchie to Create Speed Networking Events