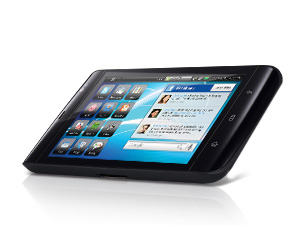 While it may sometimes seem like it, Mobile World Congress isn’t just about sexy new handsets. There’s a lively developer and startup scene here in Barcelona this week too. Part of that is the Mobile Premier Awards.

This afternoon, startups and developers have been up on stage pitching their apps, and after some tough deliberation from the judges the following winners have been announced.

Spork – Like a ‘Foodspotting for the future’, the app lets users find the food they want, at locations close to them.

WahWah.fm – Mobile DJing, streaming the audio you listen to on your phone letting others listen to your taste in real time..

Cardmobili – A mobile service to manage rewards and membership cards. It allows users to carry their cards on mobile phones, collect and use rewards, and share them with friends.

Congratulations to the winners, and we’ll be keeping a close eye on them, and many of the other apps that pitched, at The Next Web over the coming months.

Read next: Google releases an extension to block sites from search results.