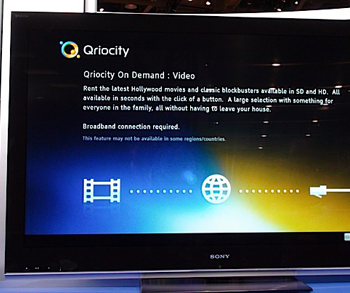 While Apple’s TV announcement today wasn’t as big as expected, it wasn’t the only streaming video news today. Just before Apple’s even began, Sony announced that its Video on Demand service is to launch in select European countries later this year.

First let’s get the the ridiculous name out of the way. It’s called Qriocity. Seriously, any product name that takes several read-throughs to work out how to pronounce should probably be changed. Read it a few times and you might realise it’s a play on “curiosity”.

The service is already live the USA. When it launches in France, Germany, Italy, Spain, and the UK, owners of networked Sony devices, including the Playstation 3, will be able to stream movies from 20th Century Fox, Lionsgate, MGM, NBC Universal, Paramount and Sony. Playstation 3 users can already rent movies online, but this requires a full download of the content before it can be played. Streaming should be much more convenient.

From late this year, music streaming will be added to the service under the name “Music Unlimited powered by Qriocity”. This cloud-based service will offer “millions” of songs on demand to owners of 2010 models of Sony’s network-enabled TVs, Blu-ray Disc players, Blu-ray Home Theatre systems, as well as the PlayStation 3 and Sony’s PC line.

Streaming video isn’t quite as established in Europe as it is in the US yet, so Sony may well pick up some interest with Qriocity. However, as it only works with Sony’s own products, this is more of a ‘value add’ for its customers than a significant move on its own.

Read next: Can you two date?