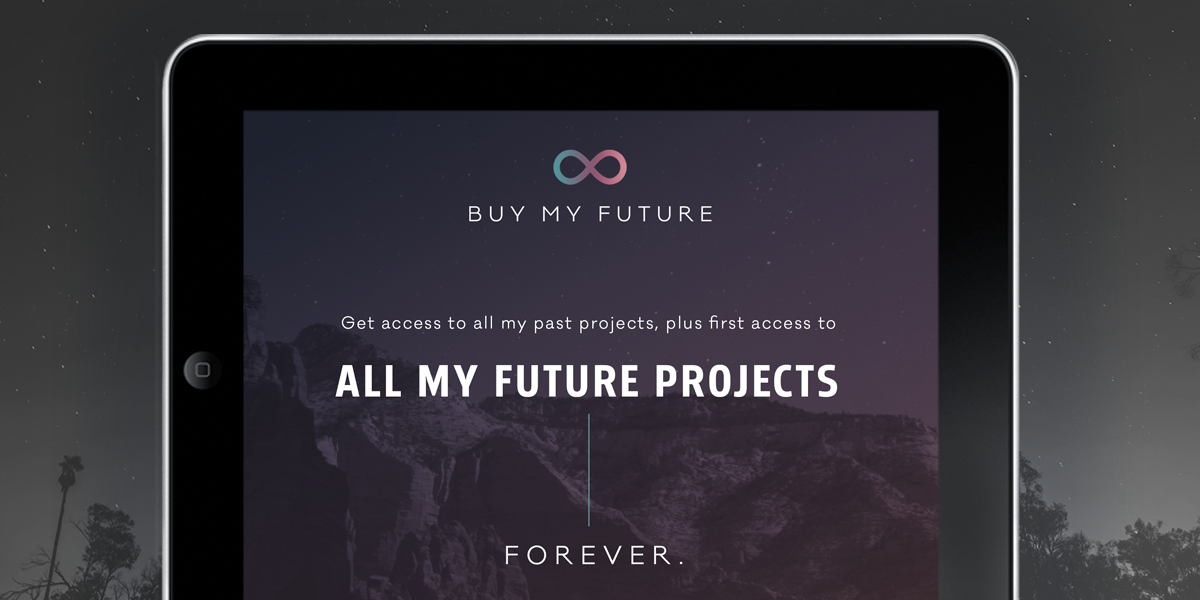 Jason Zook (née Sadler) makes a living writing books, designing Web products and attending speaking engagements, but you might know him best as the man who sold his last name as a billboard.

Owner of IWearYourShirt.com, Zook originally began his project by getting companies to pay him to wear their T-shirts while he records UStream or YouTube videos, or engage with his thousands of social media followers. Eventually, big brands like Nissan and Starbucks got Zook and groups of people to promote their companies with T-shirt campaigns.

Then, Zook (ironically) made a name for himself when he legally changed his last name for any company that was willing to buy it as advertising space. Between 2012 and 2015, he became Jason Headsetsdotcom, then Jason SurfrApp, before settling as Jason Zook (in honor of his great grandfather.)

With his last name off the market, Zook’s got one last thing he’s willing to sell: His future.

In his new project, “Buy My Future,” Zook is offering access to all his previous projects (books, campaigns, apps, etc.) and future projects for a one-time investment of $1,000.

In an interview, he tells us that the idea came about when he looked through his old journal and noticed one remark: I wish I didn’t have to sell things.

“That line stood out to me because I realized that I just want to focus on creation. But you need money to support these ventures, and the more you create, the more you have to sell,” Zook says.

He decided on the $1,000 price tag as he believed it was the ideal price like-minded creative professionals could afford and invest in. “There’s no other way I can give you more maximum lifetime value than that one time payment.”

With Buy My Future, Zook offers an estimated value of $4,500 in current projects, and first dibs on whatever he creates next. At this time, he already has six projects in tow (two books, two courses, two Web apps), but those who buy in will be allowed to discuss and collaborate on the types of things they are interested in developing.

While there is no payout in the beginning, if his projects begin to make money, he will figure out how to split the equity between his supporters. Two days since the project launched, 22 people have bought Zook’s “future” (which doesn’t include any physical assets such as his home or family, he clarifies.)

“There are so many things that are ahead of me that will help people be creative and grow their businesses – and that’s what I really want to do with Buy My Future,” Zook says. “It’s for people who support me and know that I wanna do the same for them.”

Buy My Future will continue to take purchases until October 6.

Read next: The iPhone 6s outperforms the 2015 MacBook in some tests, which says a lot about the iPad Pro