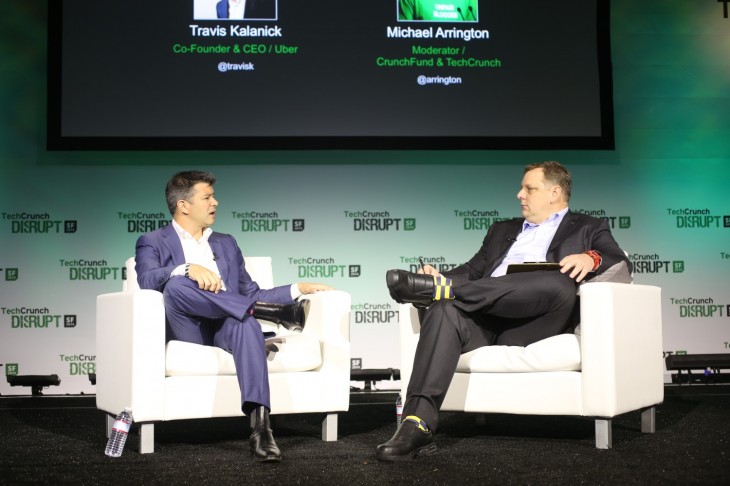 At TechCrunch’s annual Disrupt event in San Francisco (after some issues with electricity that saw the lights and audio go out as the show began), the first chat was between Uber CEO, Travis Kalanick and former TechCrunch founder Michael Arrington. Arrington (who’s CrunchFund is an investor in Uber), asked Kalanick about his salary and growth, and wondered why the press is always picking on the CEO.

While fielding softball questions from Arrington who peppered his interview with slams against competitor Lyft and the taxi industry without disclosing his status as an investor, Kalanick stated that his company was creating 50,000 jobs a month and that it had “hundreds of thousands of partners connected to the system.”

When asked by Arrington if he was interested in acquiring Lyft to stop the company’s “whining” and to “shut them up,” Kalanick said that Uber was not in acquisition mode.

The conversation also touched on Kalanick’s rather confrontational relationship with the press. The CEO marked that up to his scrappy fierceness that comes from being a serial start up entrepreneur that doesn’t translate well to now being the “big guy” in the market. “when you’re perceived as the big guy you’re not allowed to be scrappy fierce. When you’re the little guy that’s the heroic startup story,” he said.

As for his salary, Kalanick said that he didn’t think it was appropriate to talk about that at the event. In other words, he probably makes a lot of money.