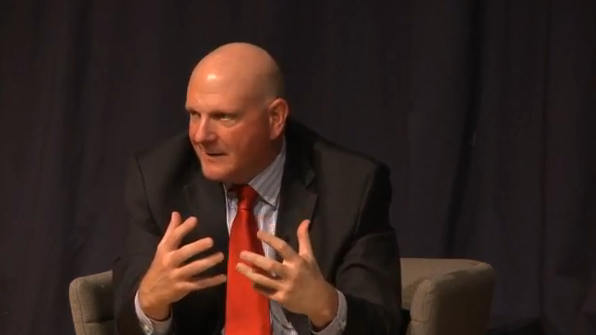 One month after Microsoft announced Satya Nadella as its new CEO, predecessor Steve Ballmer made an appearance at the Saïd Business School, part of England’s Oxford University, where he discussed many things with his long-time friend Professor Peter Tufano, who’s now Dean of the School.

As we noted earlier, Ballmer wasn’t short on advice for fledgling startups and budding entrepreneurs, but when prodded by Tufano specifically on the issue of failure and success – not only in startups but large corporations – he had some words of wisdom to share with the world.

“If you look at things in the past ten years, I think it’s probably fair to say there are things that did not go as well as we intended to,” says Ballmer. “We’d have a stronger position in the phone market if I could redo the last ten years. And yet one of the things you say to yourself is, ‘do you give up?’ There’s a whole ethos and culture and rhetoric around startups, that I think is wrong.”

This rhetoric, according to Ballmer, is that startups should succeed quickly and fail fast. “I actually think that what really great companies do, is they don’t fail fast,” he explains. “They may modify their ideas, they may see that their core proposition needs to change, but it’s a great team of people that’s fired up and found a really fertile area, and you just keep working it until you get it to be absolutely successful.”

Of course, Ballmer acknowledges that this isn’t always how things turn out – money runs out, you fail and the world still spins around. But from his own experience at Microsoft, persistence is key.

“Our job isn’t to give up and go home,” he says. “It’s to try and continue the initiative, and catch the next wave of rapid innovation. Take the world ten years from now, do you think we’ll use devices that look anything like the devices that we have here today?”

Whether it’s Google Glass or Google ear-muffs, devices certainly will be different a decade from now, and it’s this that was pivotal to his point that if you’re behind in an area just now, you just try and catch them up at the next opportunity. Though perhaps in Microsoft’s case, it has yet to do that in many respects – particularly with smartphones. But that’s not to say that it can’t and won’t reclaim any market that it has lost.

There are lessons to be learned here for younger companies too, with Ballmer noting that patience, adaptability and tenacity are key attributes for people looking to make waves in the startup realm.

“Microsoft was launched in 1975, but I wouldn’t say we hit the big-time until some time in the mid-to-late nineties,” explains Ballmer.

“Google was started in ’97-ish, I would say they hit the big time probably ten years later,” he continues. “Facebook’s ten-years-old, they’ll make over a billion dollars this year, and that’s pretty good. But that’s ten years – that’s not, ‘Oh, we fell out of bed, and then we were successful five minutes later. SAP was at things twenty years before they were successful, Oracle was at things fifteen years. And while things are somewhat faster today, the notion of taking a long-term point-of-view is the number one thing missing in most companies – big, small or startup.”

Read next: In under two months, Overstock.com passes $1 million in sales generated from Bitcoin orders