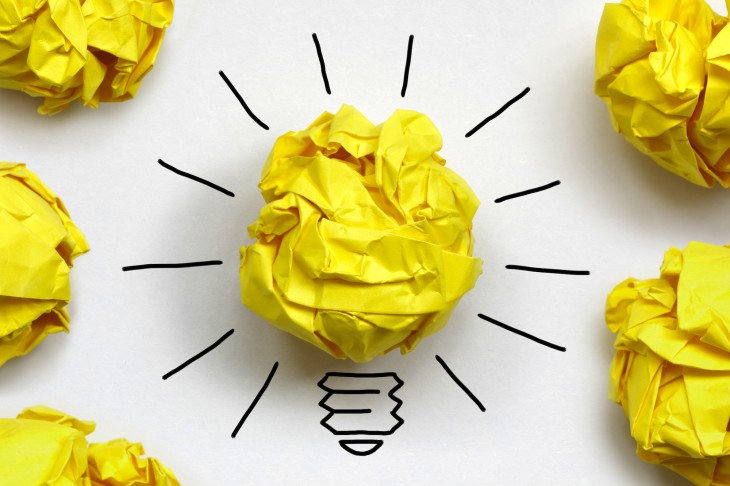 This post was originally published on the ooomf blog.

Over dinner a couple months ago, one of my friends said he needed some help coming up with a name for a new website.

He told me a bit about the site and asked if I could help think of something over dinner. He also asked my other friends to join in so we could get a whole bunch of ideas on the table and choose the best one.

From my experience working at an agency, as a designer, and at ooomf, coming up with ideas from a single brainstorming session like this one is usually not the most effective way. Many people I’ve come across, including the most creative ones, need individual time to let ideas marinate before the best concept reveals itself (even if it’s something that seems as simple as naming a website).

I encouraged my friend to take some time to do the same — to play with his concept a bit more before bringing it to anyone for more input.

After this experience, I wondered why the group brainstorming session is often the default choice when we’re pressed to find that perfect idea?

The origins of the brainstorming session

In the 1940s, advertising executive, Alex Osborn, was frustrated with his employees’ creative output and began experimenting with ways to improve it.

In 1953, Osborn published a book titled Applied Imagination, where he discussed how group brainstorming is a more efficient way to improve ideation compared to individual thought.

To have an effective brainstorming session, Osborn outlined that the group must:

This sounds like simple criteria to follow but the challenge is actually orchestrating brainstorming sessions where these two principles are consistently put into practice.

What goes on in your brain during a group brainstorming session

Unfortunately, the typical brainstorming meetings that many of us experience today do not follow Osborn’s criteria. Even if the intentions of the meetings are good, most break one or both of Osborn’s principles because there are multiple psychological factors at play that are hard to control.

Here’s the most common social factors that make group brainstorming sessions difficult to get right:

1. Fear of judgment from people in positions of power

Studies indicate that it’s difficult for people to remove fear of judgement when presenting ideas in meetings where a boss or someone with a higher status in the company is present.

Since most meetings include a manager, boss, or someone in a position of power, there’s a chance that presenting a bad idea, may make you look like you’re not smart and perhaps unworthy of your job.

This makes you less likely to share quirky ideas for fear that they may come off as bad ones.

When faced with creating ideas during a group setting, extroverts find it more natural to share their ideas; whereas introverts, are more likely to process information internally and make meaning before contributing to the group discussion.

Brain imaging studies have shown that in the presence of external stimulation, introverts show more activity in the regions of the brain that process information, make meaning, and problem solve compared to extroverts.

In fact, the pathway where external stimuli travels in an introvert is much longer than that of a person who is more extroverted, navigating through complex areas of the brain associated with information processing and problem solving.

Here’s a graphic showing the difference:

This difference in neural processing can hurt the effectiveness of a typical group brainstorming session because people in the group who are more extroverted will naturally get their ideas out faster than introverts, whether they have the most innovative ideas or not.

No matter how much we say we love creative ideas as a society, our brains are hardwired to fear novelty.

Rsearchers at Cornell, the University of Pennsylvania, and the University of North Carolina noted that we generally value practical ideas because they are proven and familiar compared to novel concepts which are riskier to endorse.

This thought process is difficult to control because it’s driven by a built-in motivation to reduce uncertainty in our lives. Making a wrong decision is literally painful for our brains to cope with so we tend to seek out ideas that are safer.

This tweet by Box founder Aaron Levie sums up how people tend to react to ideas:

The incubation period: the forgotten step to great ideas

Many brainstorming sessions are thought of as an end goal — that an answer needs be drawn at its conclusion for it to have “worked.”

If the perfect idea doesn’t show itself by the end of the meeting, the brainstorming session is usually deemed a failure.

This is in spite of research that show the optimal process for creativity is not within a single group setting with time as the official.

Creative theorist Graham Wallas presented one of the first models of the creative process in 1926. Wallas noted that our creative process stems from an evolutionary process that allows us to adapt quickly to rapidly changing environments.

Wallas concluded that the creative process can be broken down into 5 stages:

The problem is, we typically cannot move through this creative process within a single group meeting.

Sometimes the incubation stage itself can take days or weeks before you get a feeling that a good idea is on the way. Many of the most creative people in the world validate this, reporting they only arrive at the best solutions after a constant zig zag through alternatives.

The incubation period can be stressful because there is no clear time as to when inspiration may strike and to make matters worse, it looks like no progress is being made.

Sally Hogshead, an author and creative director who helps develop ideas for both Fortune 500 companies and start-ups, even compared the incubation period as a time of doubt leading into agony:

But coming to terms with how the creative process works is important for it to work. As Albert Einstein noted,

“Creativity is the residue of time wasted.” — Albert Einstein

Being too rigid in the creative process can kill the seeds of exceptional ideas.

Joshua Slayton, an engineer at AngelList, shared this slide in a recent presentation, making the case for the importance of removing rules when it comes to creativity:

The point of brainstorming is to set aside uninterrupted time to think about how to solve a problem. This doesn’t mean a brainstorming session has to always be done in a group setting to be effective.

When you give yourself alone time to ponder an idea, you don’t have to worry about other people’s perceptions, which opens up more creative avenues for you to explore.

Scott Berkun, author of The Year Without Pants: WordPress.com and the Future of Work, notes the importance of individual thought to spark creativity in people:

“Great programmers, designers, and even managers come up with many of their best ideas in the solitary space of their own minds, or when working alone at desks and computers. It’s important to remember that you don’t need a big meeting or some fancy process to generate ideas: a brain, some desire, and some time are all you need.”

Removing the fear of judgement from others by giving yourself alone time with a concept can help improve your creative output.

Input from someone else or a small group is most valuable once you’ve had some initial time to think about an idea individually.

In 2008, research from the University of Toronto showed that group brainstorming can be more effective if people come to a group session after some initial ideas are already cooking.

In other words, showing up with a blank slate to a meeting is not as effective as coming in with a few boundaries in place.

How we “brainstorm” at ooomf

When I or one of my co-founders setup a group meeting with some initial thought already done, we’ve seen dramatic improvement in the quality of ideas and steps to execution.

Most of our blog posts and tools like Unsplash and How Much To Make An App came from initial time spent alone where there was a spark of inspiration before we explored the concepts as a team.

I’ve since observed a loose format that our most effective group meetings tend to follow. Everything from this list might not work for you but you’re free to take from it what you wish:

Read next: In 2012 I bought an apartment specifically to rent out on Airbnb. Here's how I've done so far.