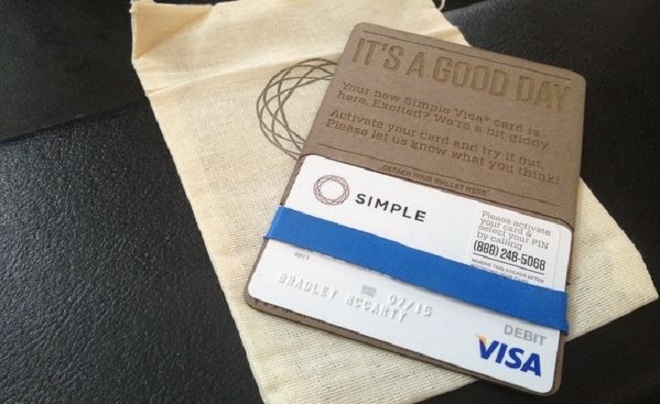 One of the hard parts about being an early adopter is dealing with the early pros and cons. But when you’re talking about moving your money to a “bank” that’s also a startup, it’s potentially a whole different ballgame. While I’ve been a big supporter of the mission of Simple since its inception, the company ran into a sticky situation today and took the opportunity to act in a way that should serve as a lesson to startups everywhere.

Let’s go back to the beginning – Simple is an online-only bank. Everything you do is handled via direct deposit, its super-sexy mobile app or the Simple website. This is great for probably 99% of what you do, but there are still those times when you need to write a check for the paper-loving stalwarts of the world. In my case, it’s my landlord. 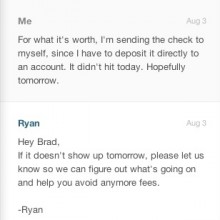 Fortunately, Simple has a feature for sending money whereby a check is printed and sent to the address of your choice. Since I have to deposit my rent directly to my landlord’s account, I opted to have the check sent to my house. Friday rolls around, when the check is due to arrive, and it’s not here. Saturday, nothing, so I place a Support request on the Simple website. Today, still no check so it’s time to call and see what can be done.

The first answer is what anyone would do – stop payment. Fortunately there was no fee for this, because that’s one of the ways in which Simple differentiates itself. Unfortunately, they couldn’t tell me when I’d see my money again. This was a very big problem. I was promised a phone call later in the day to update me, but my landlord doesn’t care what’s going on, she only cares where her money is. Understandable.

So I did what any good geek would do, and I put a quick message out on Twitter. No more than 2 minutes later, I had a response from ^RG of Simple (who’s Rachel, by the way):

Another 2 minutes and my phone rings. It’s Rachel, calling me from Simple to try to find out what’s going on. I relayed the story, explained my frustration and 3 minutes later I hear words of magic:

“We’re going to issue a conditional credit for the amount of the check.”

5 minutes later, my screen refreshes on the Simple site and there’s a credit:

Did they have to do that? Nope. I’m sure that there’s something somewhere which would protect the bank for X amount of days until the money became available again. But the fact is that they did. Simple lived up to its promise of being “better than a bank”. What’s more is that the company went above and beyond, making certain that I was informed every single step of the way.

Startups, this is how you get and keep customers.

Read next: Windows 8's packaging leaked: TNW's first reaction is that pretty this is not