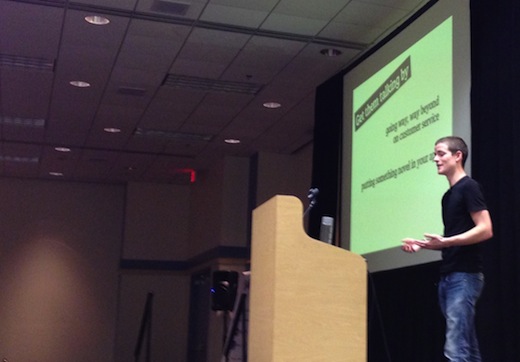 There are a few prolific speakers and bloggers in the world of development. Dave Winer, of course, comes to mind almost immediately But one that I’ve always enjoyed reading is Zach Holman, of GitHub. One of his recent writings, about the work that developers often hand over to their users, caused quite the stir. But at the same time it made me (and many others) reconsider how it is that we’re running our companies.

Holman joined the crowd at SuperConf 2012 in Miami today with a talk entitled “Side Projects”. But his real message had to do with promotions, self-promotion and word of mouth. (You can catch Holman’s slide deck here.)

Word of mouth, according to Holman, is content. It’s not a Facebook share button or a Twitter button asking your users to tweet. Word of mouth is what happens to make people genuinely excited to tell their friends. But far too often in technology, people are afraid to talk about what they’re doing. Holman chalks this up to modesty:

“There are a lot of modest people in technology, and this is great. That’s why here aren’t as many douchebags in our industry. But overall you have to not be nervous about talking about something that you’re really excited about.”

So how do you excite people? Holman has two schools of thought that he sums up as being quiet or being loud. In the camp of quiet, which is the model that GitHub follows, changes, fixes and upgrades are never pre-announced. You simply show up one day with a greeting of “good morning. We fixed everything that you had a problem with for the last year.” It’s a matter of surprising and delighting, which Holman notes as happening far too little these days.

“It’s a sad fact about our society that when you care about people and go the extra mile, it’s noteworthy.”

The other side of the story comes from those who are being loud. Holman brings up 37signals in an example, which is especially interesting because the company tends to under-promise and over-deliver as a rule. But Holman points out a recent change where 37signals pre-announced numerous features and fixes. But there’s a catch – if you’re going to be noisy, you have to make absolutely certain that you’re meeting deadlines.

These are the actions that get word of mouth moving. Not a tweet, not a Facebook share. Because those only go so far. Don’t be afraid to talk about yourself, your company and what you’re doing. It’s another step toward that word of mouth.

As another case in point, Holman brings up Apple’s launch of the initial iPhone. Announced in January, the company was then quiet for the next few months, leading up to the July release. But then, in June, something magical happened. Apple ran a couple of ads, but it was also uncharacteristically transparent about the development. The release of the SKD, the choice to upgrade to a glass screen from plastic – these, among others, were announcements that led to the company getting no fewer than 7 mentions in the national press

Finally, Holman has some parting advice that I think all of us could use:

That doesn’t mean to ignore your users. It means that you can’t pay attention to the 1 nasty tweet while ignoring the hundreds of positive ones. Keep focused, keep your product moving and do what you know you’re supposed to be doing.

Read next: Tencent games platform, microblog will reportedly be integrated into WP7 'Tango' in China