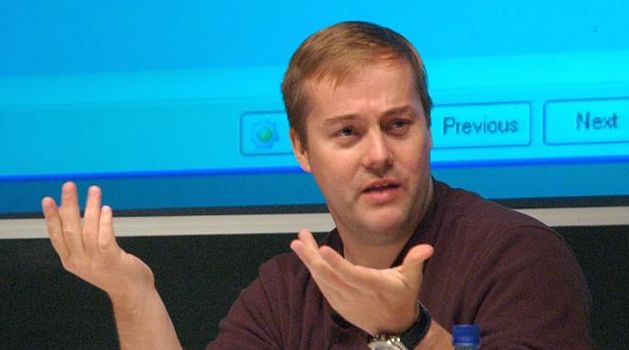 The Next Web is out and about in London this week for Internet Week Europe, and you can monitor all our coverage from the event here.

This Friday, we’ll be at the Power of One conference at Battersea Power Station, and we’ve already outlined 5 reasons you should consider going along too. The main underlying ethos of the event takes a slightly different slant to your typical tech conference, focusing on getting developers and entrepreneurs together to celebrate how much the individual can achieve in today’s tech industry.

One of the speakers at the event is Jason Calacanis, CEO and Founder of Mahalo, a user-powered search engine. And he’s also founder of ThisWeekIn.com, and an angel investor.

Prior to all of this, Jason launched the Silicon Alley Reporter way back in 1996, it was an American trade publication looking at New York’s answer to Silicon Valley. It was renamed the Venture Reporter in 2001, shifting its editorial position beyond New York and the Internet, and was later sold to Dow Jones in 2003. He then co-founded Weblogs, Inc. in 2004, a network of about 90 blogs, covering various subjects, and which became a wholly owned subsidiary of AOL in November of 2005.

Jason also recently launched his own startup conference, called LAUNCH, and The Next Web’s Hermione Way interviewed him at the event back in February. Here’s the video again:

The Next Web caught up with Jason just before he jetted out from San Francisco to attend the event in London this week. And here’s what he had to say.

The Next Web (TNW): It says on your blog that you invest in 3 startups at around $10-50k a year. Is that an actual target you set yourself, or is that more what it works out at on average?

Jason Calacanis (JC): I’ve invested in about 10 a year for the past two years, so the average is higher. Right now, I’m taking a pause so I can give enough attention to the folks I’ve already committed to and so I can concentrate on Mahalo, LAUNCH and ThisWeekIn.com. Right now I’m seriously over-committed and I’ve been spending the last year trying to reduce the amount on my plate by bringing on seriously awesome team members.

TNW: Can you outline some of your most lucrative startup investments so far – so the ones that have secured you the biggest return?

JC: I’ve had one startup return 2x in a year on a cash basis, plus got shares in the company that acquired it. That should wind up being a 5x+ return. Other startups in my portfolio are up 5-15x in terms of later rounds of financing. That’s mainly because I’ve selected really great entrepreneurs to back, but also because two years ago startup valuations at the angel round were low ($1-4m), and now A rounds are high ($10-25M).

The amount I’ve invested, however, isn’t going to have a major impact on my lifestyle unless I happen to hit a Google or Facebook-like return. I angel invest because I love helping other founders and watching stuff grow.

TNW: Any startups you’re working with at the moment that you’re particularly excited about that have yet to really take-off?

JC: Frequently I have folks come up to me and say they love Uber, Rapportive and Backupify, among others.

TNW: How hands-on are you with the guidance you give startups under your wing – do you like to give autonomy as much as possible? Or do you only invest in startups where you don’t feel like you have to give too much guidance?

JC: If they want advice I give it by the bucketload and if they don’t want advice I just have coffee with them and share what I’m seeing in the market. I’m an entrepreneur and I hate when my investors tell me what to do – but I love when they have conversations with me.

So, I’ve learned that hanging out, being a warm shoulder and just rapping out is the best way to help.

TNW: Can you tell me a little bit about how Mahalo is progressing since you launched version 4.0 this year? Any other big developments with Mahalo in the pipeline?

JC: After pivoting out of comprehensive, human-powered search which, ironically, is where Bing and Google have wound up, we focused on actually teaching folks how to do things. The two huge hits for us were YouTube (where we have 30M views a month and 50k+ videos) and now iPad apps.

It’s neck and neck which medium will be the big winner. YouTube is better for viewership and Apps are better for revenue. My guess is that we’ll be 2/3rd one and 1/3rd the other…I’m just not sure which!

TNW: Your LAUNCH event will be hitting its second year in 2012. Can we expect anything different from the next one?

JC: I’m in love with the model I created for the TechCrunch50 and LAUNCH conference, which is 50 startups show something awesome in five minutes or less and then get pounded by the judges. I don’t think we need to change anything, but I have made the prices lower and lower to bring in more people. At TechCrunch Distrupt, they’re charging like $3,000 which is really abusive in my mind. I’m going for the $300 range so that more than VCs, headhunters and lawyers can attend.

TNW: I wanted to ask you about any involvement you’ve had with UK or European companies. Are there any that you’re working with? Is there anything you’ve noticed that are different between working with EU and US companies?

JC: We have a This Week in Startups meetup every two or three months where UK companies pitch to us. It’s been a huge success and a I’m really impressed with the quality of the companies.

TNW: You must’ve seen a lot of startup pitches in your time. What’s the one thing that bugs you above all else when being pitched to?

JC: People who talk about how broken something really successful is, without having a better product. If you’re going to say Google search, Facebook, Twitter or the iPhone are bad – you better have something awesome to show me.

TNW: Many startups I speak to launch a product, then pivot at a later point when they realize customers aren’t using it in the way that they’d hoped. Do you think there’s any way of cutting out this middle bit that many startups go through, or do you think it’s necessary just to launch a product as quickly as possible so you can gather feedback and see how people respond to it?

JC: The best practice today is to get a product in the market and learn. You can’t do it any other way in my mind, at least not for Internet companies.

TNW: I quite liked the analogy you’ve used before to describe startups making the wrong move based on their gut-feeling, which you described as the death spiral. Can you give me an example of a time when a startup has ignored the metrics – such as revenue, burn rate, page-views and gone with their gut instead?

JC: There are countless ones out there, but I think at Silicon Alley Reporter we hit the death spiral and we thought “the Internet market has to come back, and with it will be all the dotcom advertisers.” The market did come back, but it took five years–much longer than we had to right the ship. We did do a final pivot to a venture capital based magazine and database (venture reporter), but I sold it for a fraction of the value of the Silicon Alley Reporter.

TNW: Speaking of which, you founded Silicon Alley Reporter back in 1996, and worked on it all the way through the first dotcom boom. In light of the latest resurgence in Internet businesses, do you miss being a reporter at all?

JC: I loved my magazine days, but I’m loving the iPad 100x more.  I don’t look backwards. In terms of when I’m happiest – outside of time with my family and friends – it’s when I’m writing, speaking or hosting my show. I’d love to be Howard Stern or Charlie Rose, those guys have the best life ever.

TNW: You must be invited to speak at many events – how do you decide which ones you’re going to?

JC: I only give keynotes at this point, because panels are ‘death’. I guess I would do a panel if it was filled with folks more important than me, but otherwise I do keynotes. There are three reasons I’ll do a speaking gig: 1. It’s for a friend, 2. I have something to sell or promote and 3. They make a donation to the school I’m on the board of in Brooklyn.

I try to do three or four a year.

TNW: Was there anything in particular about the Power of One that stood out?

JC: It’s (Ryan) Carson‘s event. He supported me early on so it’s my giri to speak now.

TNW: And can you share some bullets about what you’ll be talking about?

JC: I’m going to talk about how awesome the time we live in is, why everyone is so depressed and why every problem we face is easily solvable. It’s my “don’t panic, everything is going to be OK” talk.

The Power of One Conference: Ticket discount

The Next Web readers will receive a 20% discount on the conference ticket price. Simply go to register, select how many tickets you want, hit the ‘Click here to enter a promotion code‘ button, and enter the code: TNW.

What? Power of One
Where? Battersea Power Station, 188 Kirtling Street, London, SW8 5BP
When?Friday 11th of November, 2011
How much? £99 +VAT. The Next Web readers will receive an additional 20% discount by using the promo code TNW, when booking online

Read next: Social video: Where we're at and where we're going