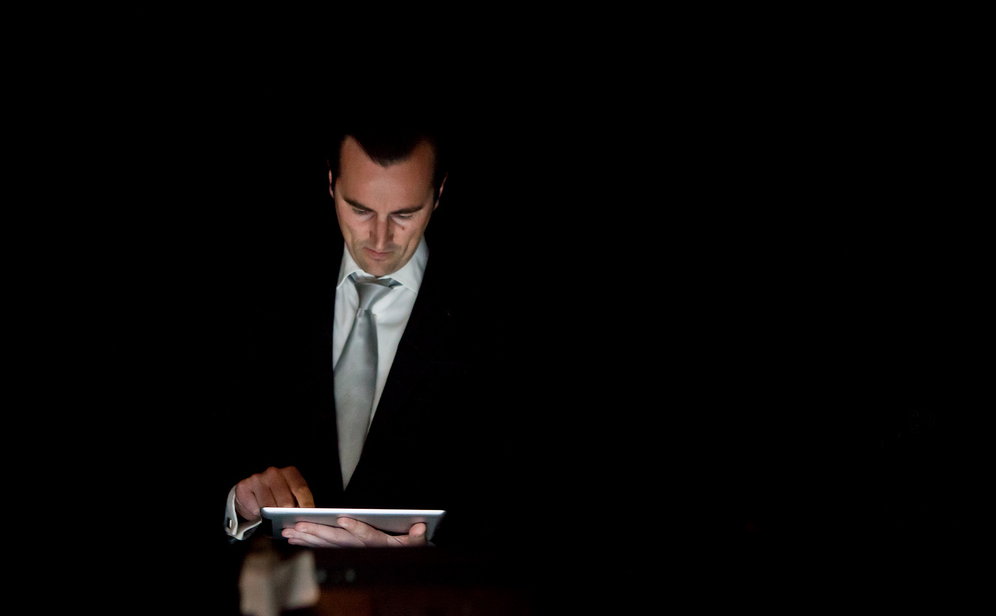 This is the fourth in a series on Stylish Entrepreneurs (sponsored by Gillette!). And since our Entrepreneur Channel Editor and Co-Founder of The Next Web, Boris Veldhuijzen Van Zanten is currently soaking up the sun on the Mediterranean in Andalusia, Spain, I’m going to be guest blogging this week.

When our Editor-in-Chief, Zee M. Kane asked me to take a look at the fashionable entrepreneurs in the world naming gentleman like Sean Parker and Kevin Rose, I thought, well who could possibly be more fashionable than our very own Boris? Just over a week ago I was sipping champagne with him, lounging on a boat ride down one of Amsterdam’s canals and thought, “Damn, this man has style.”

Photo 1: Having just wrapped up our 3-day conference in Amsterdam, Boris catches up on a few phone calls while relaxing on a lovely evening boat ride. You’d imagine 3-days of hard work and partying would put most people out of commission (like yours truly), but Boris doesn’t even show a single sign of stress. In fact, when it comes to approaching life with balance and ease, it’s Dutch 1: New Yorkers 0.

Photo 2: At The Next Web Conference in Amsterdam, Boris dazzled the crowd with his bright purple ties, patterned, tailored suits and chic cufflinks. Boris is genetically lucky; being so damn dapper is easy when you’re towering over an audience with an impressive height of 6’5” and a slim, lanky frame.

Photo 3: Boris, keeping it light and fun on the dance floor with his beautiful girlfriend Tessa.

Starting companies, inventing innovative technology and coming up with new ideas is my work. A lot of my time is spent on keeping up with new trends on the web, internet and in technology in general and looking for opportunities.

Photo 4: At the 2010 The Next Web Conference, Boris is joined by his The Next Web co-founders Patrick and Arjen, along with Miss Hermione Way, our Video Producer in matching white outfits. Simple, classy and clean.

Photo 5: Being a stylish entrepreneur is only half the game. You have to have spunk, personality and the ability to poke fun at yourself. Taking yourself seriously isn’t very stylish. So here is requisite proof that Boris knows how to have a good laugh.

Photo 6: (Zee’s favorite photo): This is what I’d like to call Boris’ “Wall Street in the Pool” look complete with a 3- piece suit, red tie, BlackBerry and proof that our fearless leader is not afraid to get his feet wet.

Prior to The Next Web, Boris started his first company, V3 Redirect Services, in 1997. V3 gave away redirect urls like come.to/boris, listen.to/music and surf.to/eric. He later sold V3 in 1999 to Fortunecity.com, which was about to go public on the Neuer Markt.

In 2003 Boris started a Wi-Fi Hotspot operator in the Netherlands. He named it HubHop and started installing Wi-Fi Access Points in bars, hotels and other public places as fast as he could. Within 6 months he had over 50 HotSpots and KPN approached the company to talk about acquiring it. 8 months after incorporating, they sold 51% to KPN. Another 6 months later they sold the other 49% too.

Since then Boris has started several projects and companies including The Next Web Conference and Fleck.com. More recently he started TwitterCounter.com, which you could describeas a combination of Feedburner and or Google Analytics for Twitter.

For his 140-character musings, follow @Boris on Twitter. Who else has made the cut? See our previous Stylish Technology Entrepreneurs: Steve Jobs and  Jack Dorsey.

Read next: Skype: The Story So Far