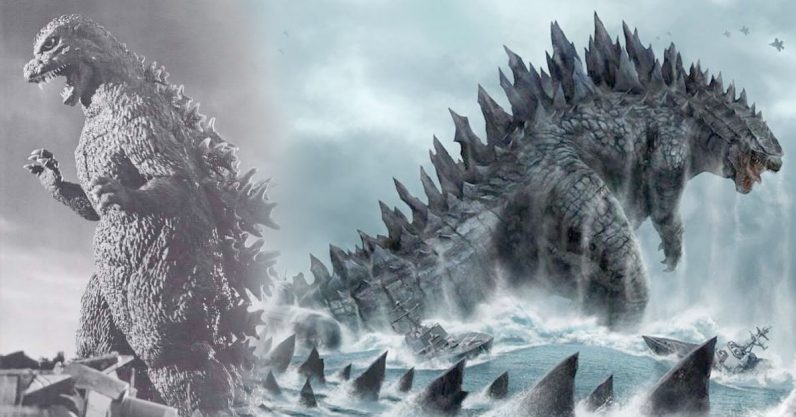 A pair of scientists from prestigious Dartmouth University recently published research postulating why Godzilla has more than doubled in size since 1954. If you guessed a gym membership and a high-protein diet: you’re wrong.

The King of the Monsters’ incredible evolution in fiction is, arguably, due to real-world global anxiety over increasing nationalism and the US military’s continued nuclear aggression.

The research argues that Godzilla‘s appearance changes, while surely attributable to the various film companies and personnel who’ve worked on the movies over the decades, are due to spikes in “humanity’s collective anxiety.” In other words: the worse humanity becomes in real-life, the bigger Godzilla gets. The duo, consisting of Nathaniel J. Dominy and Ryan Calsbeek, even drew a direct comparison to the US military’s budget over the past 65 years and Godzilla‘s size.

Godzilla is the ultimate movie monster icon. Over the past 65 years the legendary lizard has appeared in 35 films and achieved global household recognition. What you may not know – unless you’re a hardcore fan – is that the kaiju (whose original Japanese name “Gojira” is a portmanteau of the words “gorilla” and “whale”) was created as a response to the US military detonating 23 nuclear devices in the area surrounding the Bikini atoll during a period stretching from 1946 to to 1958.

The US had just dropped two atomic bombs on the civilian populations of Japanese cities Hiroshima and Nagasaki in 1945. World War II ended subsequently. The following year, the US began testing a new type of thermonuclear bomb — one it didn’t have a clear understanding of. On March 01 1954, the US military tested the first of its new bombs, “Castle Bravo,” expecting its detonation to yield a six-megaton blast.

Castle Bravo exploded with what scientists believe was 15 megatons of force. The resulting radiation wrought havoc on the Bikini atoll and surrounding areas. And when a group Japanese fishermen became sick with radiation poisoning after eating irradiated tuna – one dying from secondary infections and another fathering a stillborn, deformed child – the Japanese lashed out as their citizens were, once more, the targets of a US nuclear attack.

The tragic birth of a legend

And thus, in fiction and reality, Godzilla was born. Over the years the big green rubber-suit monster has changed. First off, as fans have discussed for decades, it keeps getting bigger. The Dartmouth team, just for kicks, did the math and determined that, were Godzilla a real dinosaur, it would have been subject to selective pressure – a determinant for evolution – 30 times greater than that of most natural systems.

All of this is silly conjecture, of course – Godzilla is a commercial enterprise, and the films are responding to market forces. Yet still we wondered, what agent of natural selection could act so swiftly and at such high intensity?

The researchers conclusion, of course, was that the same thing that created Godzilla – military aggression and humankind’s recklessness – is what’s causing it to grow to such great proportions with its 2019 “King of The Monsters” version being the largest yet.

Activist Susan Sontag wrote one of the definitive research papers on science fiction movies in 1965, observing that it’s human nature to seek relief from existential fear by imagining our horrors in fiction where they can be controlled by plot. In the paper, “The Imagination of Disaster” she concludes:

What I am suggesting is that the imagery of disaster in science fiction films is above all the emblem of an inadequate response. I do not mean to bear down on the films for this. They themselves are only a sampling, stripped of sophistication, of the inadequacy of most people’s response to the unassimilable terrors that infect their consciousness.

The Dartmouth researchers agree with some of Sontag’s points, but they’ve got the benefit of 65 years of Godzilla movies to bolster theirs where views differ. They wrote:

Sontag argued that our taste for disaster films is constant and unchanging. On the contrary, we suggest that Godzilla is evolving in response to a spike in humanity’s collective anxiety. Whether reacting to geopolitical instability, a perceived threat from terrorists, or simply fear of “the other,” many democracies are electing nationalist leaders, strengthening borders, and bolstering their military presence around the world.

Maybe Godzilla‘s new bigger-than-ever aesthetic is nothing more than the byproduct of Hollywood’s perpetual game of self one-upmanship – perhaps subsequent iterations will continue to scale for as long as audiences will pay attention.

But, considering the governments of Earth are closer to thermonuclear global mutually-assured annihilation than ever – at least according to the Bulletin of the Atomic Scientists’ Doomsday Clock – the evidence in favor of Godzilla‘s evolution being a reflection of global existential anxiety seems overwhelming.

Read next: Doom creator just released a massive addition to the original game