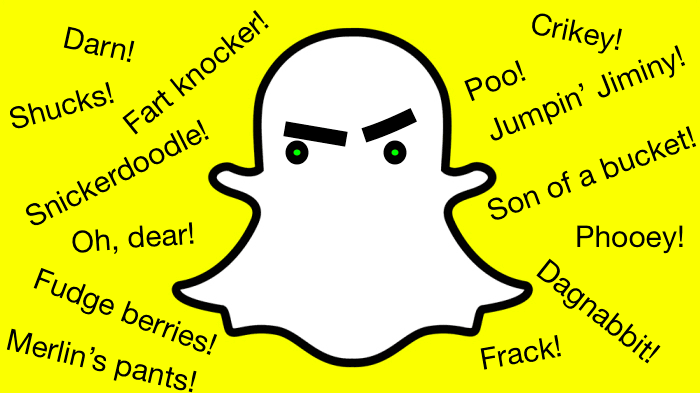 In May, hackers leaked a portion of Snapchat’s top secret source code to the wider Internet. Snapchat owner Snap Inc was quick to issue a takedown notice, but the Internet never forgets. You can still find it, if you know where to look.

I got my hands on a copy last night. What impressed me is the cleanliness of the code.

No, I’m not talking about the structure of the methods and sensible variable names. I mean that it’s literally clean, like a Mr. Rogers after-school special, with precisely zero profanity to be found anywhere.

And believe me, I looked.

Software development can be a frustrating endeavor, and coders inevitably vent their frustration through their work, leaving snarky comments and writing rude variable names. Weirdly enough, Microsoft is notorious for this.

When Redmond released the source code to early versions of Microsoft Word and MS-DOS, Dutch software developer Leon Zandman stumbled across a mountain of rants, jokes, and profanity.

'… the other registers are free to f*ck with' #msdos #source pic.twitter.com/R5Lc0ttcDk

Ten years earlier, source code files belonging to NT4 and Windows 2000 circulated across the Internet. Analysis of them unearthed some pretty amazing swears. One unnamed developer — quite rightly — had some strong feelings about mixing tabs and spaces.

You can feel the frustration in this comment. It’s palpable.

// the fucking alpha cpp compiler seems to fuck up the goddam type “LPITEMIDLIST”, so to work
// around the fucking peice of shit compiler we pass the last param as an void *instead of a LPITEMIDLIST

But what about modern-day Microsoft? Thanks to the power of GitHub, you can actually pore through the mountains of code Microsoft has released into the public domain. You don’t have to look for long before you find a few naughty words.

To be clear, I’m not ragging on Microsoft here. Software development is a creative, but intrinsically frustrating endeavor, and coders need an outlet to vent their spleens. Where better than one’s work?

So, why are are Snap Inc’s coders so good-mannered in comparison?

Perhaps it’s good parenting? Maybe Snap’s developers never had to have their mouths washed clean with soap. They learned from a young age that if you’ve got nothing nice to say, say nothing.

Or maybe Snaps’s coders are just professionals? Maybe they don’t need to be told. They instinctively know to keep things G-Rated.

Either way, my curiosity is officially piqued. If you work at Snap and have the inside scoop, drop me an email and let me know.

Read next: With $417K, EOS accounts for two-thirds of all cryptocurrency bug bounties in 2018