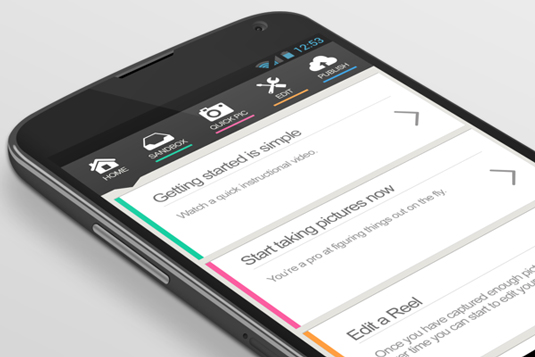 In this article we’ll explore three of the most common digital prototyping methods: presentation software (mostly for beginners), coded prototypes (intermediate to advanced), and specialized prototyping apps (for all levels of expertise).

For starters, there’s the traditional PowerPoint, a reliable business staple used for presentations for over two decades. If you’re looking for a more modern alternative, Keynote is rising in popularity.

Let’s take a look at the pros and cons so you can make an educated decision. First the pros…

And now the cons…

If you’d like to learn more, Keynotopia has some basic prototyping tutorials for Powerpoint and Keynote.

Furthering the discussion we started in The Guide to Prototyping, one of the biggest questions designers have about prototyping is whether or not to use code.

This uncertainty stems from some designers’ lack of comfort with coding: they either don’t know how to do it, or don’t like doing it. When faced with the more fun and intuitive method of using a prototyping tool or even sketching by hand, writing code can feel tedious.

Today there are more reasons than ever to start coding early, as explained in a UX Booth article by Andy Fitzgerald, senior UX architect at Deloitte Digital. The “I design it, you build it” waterfall mentality taken by designers in the past is becoming outdated as technology advances in large strides and collaboration becomes mandatory.

There are a few distinct advantages of prototyping in code, mostly owing to the fact that you’re starting the design in something that resembles the final form. As explained in The Guide to Prototyping, some advantages include:

Coded prototypes can be built in a variety of ways like HTML (or even Python), depending on your preferences. Ash Maurya, Founder and CEO of Spark59 and design speaker, suggests using Ruby on Rails because of the ease in which he can set placeholders for each page and link them together for navigation. However, the most popular code choice for prototyping will likely still be HTML.

Of course, the real consideration in deciding whether or not to use code in your prototype is your skill level. Not all designers have the ability to code, so don’t overextend yourself unless you’re technically confident. Furthermore, diving straight into code may inhibit creativity — ask yourself how many interactions and page flows you can create with 30 minutes in a prototyping tool versus a code like HTML or Javascript.

One of the most successful interaction design companies, the good people of ZURB design for sites such as eBay, Facebook, Photobucket, and NYSE. And throughout all their work they stress the importance of coding in the prototyping phase.

In their experience, coded prototyping (specifically rapid prototyping) is most valuable for usability testing, namely in finding what’s wrong early on and correcting it. If the prototype fails the usability test, another round of revisions are in order; if it passes, then it’s time to proceed to the next step.s

Verify is the ZURB app that allows users to gather feedback on their own websites and apps. While this is a useful app for designers and developers, it is the hybrid design process for the app that we’re going to focus on here:

After creating the first version of the app in a little over a month, ZURB used the time they saved for final refinements.

Eager to dive straight into a computer program that’s an actual representation of your idea? The beauty of prototyping software and apps is that it’s specifically designed for this purpose, so they provide the perfect balance between functionality, learning curve, and ease-of-use.

Both beginner and veteran designers use specialized tools like the ones below — beginners for the ease-of-use, and veterans for the controls crafted to their particular needs.

These tools vary in their capabilities, with some being better attuned to certain situations than others, so it’s best to find the one best suited to your needs. To start on your search, you can check out tools like UXPin, Invision, MockFlow,JustInMind, Axure, Omnigraffle, Flinto, or Marvel.

As described in The Guide to Prototyping, these tools have an advantage in that they are built specifically for wireframing and prototyping. Once you learn the basic features, you may find it even faster to prototype with these versus traditional methods like paper prototyping.

All prototyping tools require a little bit of time to become familiar, but they can be well worth the effort. Nonetheless, let’s make sure you consider all aspects before deciding. Here are some potential cons…

You must consider the specifics of both the product and the design team. Which platforms and methods are the designers and developers best at or most comfortable with? What are the specific goals, time frames, and limitations involved with the product you’re working with. Knowing where you’re going is the most important part — we’re just explaining the different routes to get there.

For more practical advice on low or high fidelity prototyping, download the free Guide to Prototyping. Learn how and when to use different prototyping tools and tactics, with best practices from Zurb, Google Ventures, IDEO, and many more.

Read next: Yakuza's prequel is coming to PS4 next year