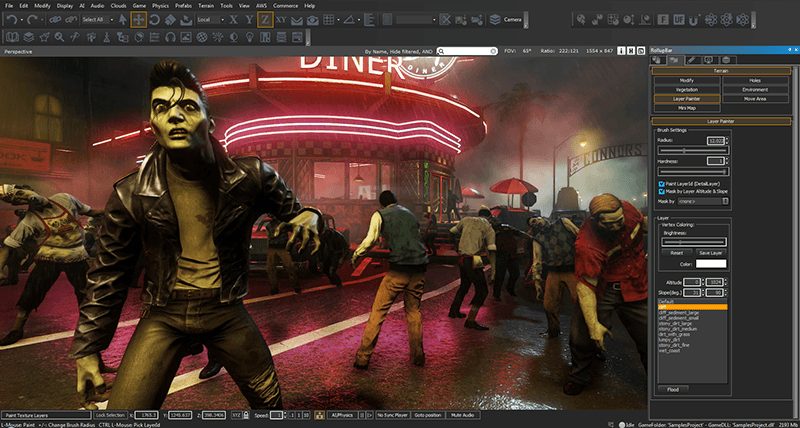 Lumberyard is a full game studio; you can build and design levels, create your visuals, animate characters, generate particles, engineer audio, handle weather and AI and basically everything else you can imagine. It provides both the infrastructure for the multiplayer component of the game as well as the tools to build the game itself.

The game engine uses Cryengine for graphics, which can generate ‘photo-realistic’ worlds — it’s best known for being the engine behind the PC-crippling Crysis games.

A new AWS service called GameLift is integrated into the app to provide scalable multiplayer architecture without requiring deep infrastructure skills. The company touts that using GameLift means developers don’t need to spend “thousands of hours” building out this infrastructure, instead promising it takes just a matter of minutes.

It’s obvious why the company is making Lumberyard available for free — as Microsoft has leveraged Azure for Xbox Live, Amazon wants game developers to use its cloud as well.

By building a tool like Lumberyard and making it freely available, the company is actively encouraging both developers and designers to deeply integrate Amazon’s cloud stack into their titles; ultimately, it’s locking them in long-term.

The most impressive part of Lumberyard is that it’s both entirely free and the code is available for developers to modify. Other game engines can cost developers in the thousands and often charge for per-seat pricing, so Amazon’s proposition is likely interesting for both large and small game developers.

Read next: 6 reasons why it's as relevant as ever to attend conferences in 2016