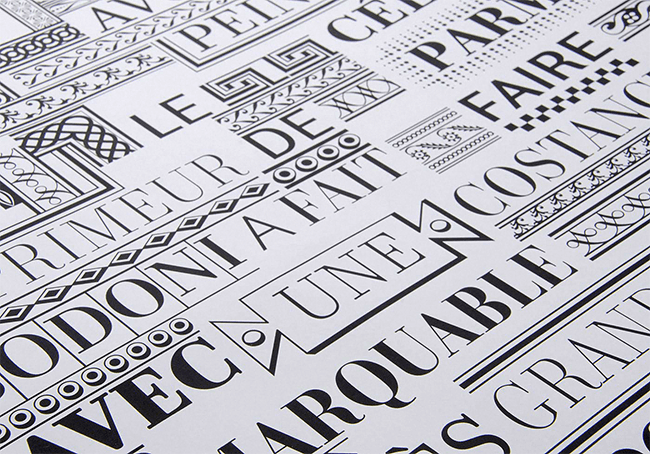 Sean Mitchell is an interactive designer based in Vancouver, British Columbia, and the editor of TypeRelease.

We’ve counted down our favorite fonts every month this year, and now it’s time to look back at what 2014 brought us in beautiful typography… in no particular order, of course.

Selfie is a connected sans based on vintage signage scripts.

Input is a flexible system of fonts designed specifically for code.

Texta is a contemporary, rational, transparent and useful sans to compose all kind of texts.

Woodkit is a playful fixed-width display series of typefaces inspired by wood type.

Galano Grotesque is a geometric sans in the tradition of Futura, Avant Garde, Avenir and the like.

Skolar Sans is an extensive typeface family for the age of responsive design. From gently thin to extra bold, the four subtly graded width variants will fit all your content needs.

Nitti Grotesk is the proportional companion to Nitti and part of a larger collection of grotesque-inspired typefaces.

Ahkio’s roots are in 1930s sign painting and showcard lettering but with a modern and individual twist.

GT Sectra is a contemporary serif typeface combining the calligraphy of the broad nip pen with the sharpness of the scalpel.

Brandon Printed has an eroded, printed look with four variations of every letter.

A script with a crisp energy and buoyancy that only the collaboration of paper and screen can lay claim to.

Jeames brings familiarity to the often detached feeling extended serif genre. The curved, heavy, joints let the letters bounce along while the proportions and contrast keep your eyes grounded.

Queue was drawn to reflect the contradictory and complex world of today.

Monolina is a contemporary monolinear script that is based on the contrast between classical calligraphy and quickly jotted manuscript.

An arsenal of nearly boundless possibilities, from ethereal thin to blinding black, with an uncommonly handy series of steps in between.

Libertad is a sans serif that mixes humanist and grotesk models.

Domaine Sans follows the similar structural logic as Domaine. Both the Domaine Sans Display and Fine have exuberant detail and high contrast; whereas Domaine Sans Text is more robust and pragmatic for extended text-setting.

Peter is a neo-grotesque sans with rational and clear basic letterforms.

A versatile monoline typeface with a distinct and eye-catching personality.

Brando is a contemporary serif with humanist proportions.

Love Script is a font with a big heart.

Lust Slim is packed with alternates to play with – enough to turn you on and satisfy.

A monumental family of typefaces designed for print and screen.

Tilda is a script typeface with size-specific styles by Jessica Hische.

FF Franziska – discreet, functional and modern, but with real personality.

FF Bauer Grotesk – revived and better than ever with six weights and italics, this is the must-have grotesk.

Urban Grotesk attempts to follow the best of traditions of grotesk typefaces.

Parmigiano Typographic System (named after Parma, the city where Bodoni established his printing house) has the stated ambition to be the most extensive family of fonts ever to have been inspired by Giambattista Bodoni.

Quire Sans is highly functional and sexy at the same time.

BC Kakao is a font family of stylistically similar fonts loosely based on calligraphy and handwriting.

Horizontes Script – finding a balance between spontaneity, elegance and beauty.

Magma is a rare sans serif typeface family designed explicitly for use in both text and display applications.

Identitet is a system designed to work together as a unified whole.

A clean, versatile font with modern sensibilities and a dash of character.

A contemporary family of two related sans serifs: one is the functional Darby Sans; the other a refined display version for large sizes, where the contrast is dramatically higher.

Diogenes is an elegant and crisp text typeface.

Want more? Here were our picks for the best typefaces of 2013.