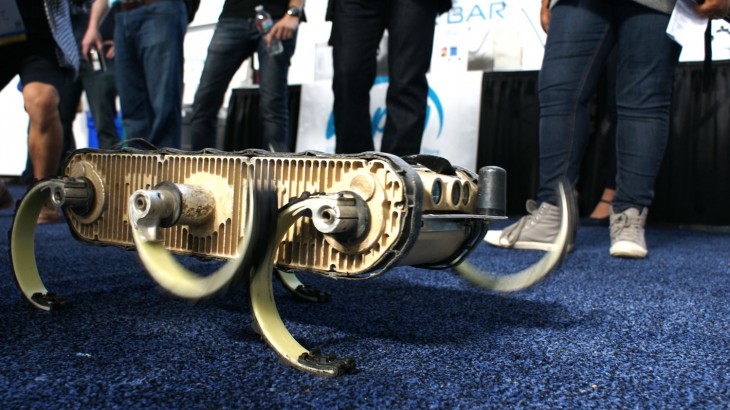 The Solid conference in San Francisco is a two-day hardware event showcasing what’s new and exciting in the world of tangible items. After years of worshiping at the feet of software, hardware development is making a come back.

Some of the reasons that hardware development is on the upswing is the wider acceptance of 3D printing and the ability to quickly prototype items with hardware from Littlebits, Arduino and Raspberry Pi. A nice byproduct is the resurgence of robots at events. We found five robots that could potentially make our lives not only easier, but also safer.

And of course, none of these robots would ever rise up against us.

Everyone’s favorite robot-making company, Google-owned Boston Dynamics showed up with two robots. The slightly frightening WildCat that can run up to 16 miles per hour (28.5MPH on a treadmill) was on display like a stuffed bear. Still intimidating, but harmless.

The more active Rhex was crawling the show floor. The six-legged surveillance robot can travel over just about any terrain and is small enough to crawl under vehicles and into tight spaces. The little guy has two speeds; quick and dirty for covering a large area in a short amount of time and the more useful slower mode that’s more stable and lets the controller of the robot see what’s happening using the built-in camera.

Baxter the collaborative robot is built to work safely around humans. If one of the robot’s arms hits something, like a person, it immediately stops moving. So instead of being thrown across the room by a robot arm, you get a tap and then a gentle nudge to get out of the way. While safety is wonderful, the robot is also incredibly easy to program.

Just set Baxter to record, grab its robot arm and claw and show it exactly what you want it to do. When you’re done, Baxter will repeat the process until you tell it to stop. The interface is controlled by a buttons and a scroll wheel found on each arm. For more complex actions, there is an API that can be used to program your new friend. The claws can be replaced with vacuum hands that suck items up and hold them until they need to be dropped. Great for grabbing and moving items too cumbersome or slippery for the claws to grasp.

Just ignore Baxter’s side eye. It’s not judging you.

Robots are supposed to do all the hard work for us. That’s part of the allure of the Roomba. The robot’s of Robotic Technologies of Tennessee are ready to take on the tough jobs in environments outside of a factory. With magnetic wheels, the robots can roll up the side of large ships, metal poles and even buildings to weld, cut or just inspect an area.

The robots not only keep humans from working at dangerous heights, but can potentially save a company money because they no longer have to rent a crane or build a scaffolding for a quick fix — just send the robot up. In addition to the robots seen above, smaller robots with endoscopic cameras are available for inspection purposes. Both can be controlled wirelessly or via a tether.

Instead of having to deal with all that heavy metal (\m/) when building a robot, just create an inflatable robot. That’s what Otherlab has done. The robot arm that was available for attendees to test worked via pneumatic pressure controlled by levers. Because the arm was inflatable when I smacked myself with it (multiple times), I wasn’t rushed to the hospital as if I had been punched by RoboCop.

The Pneubotics are still in the early testing phase, but that didn’t stop the Otherlab’s crew from setting up battling robots in a boxing ring and letting attendees relive their Rock’em Sock’em Robots childhoods.

Read next: Connect6's Chrome extension gives a simple overview of people you stumble across online