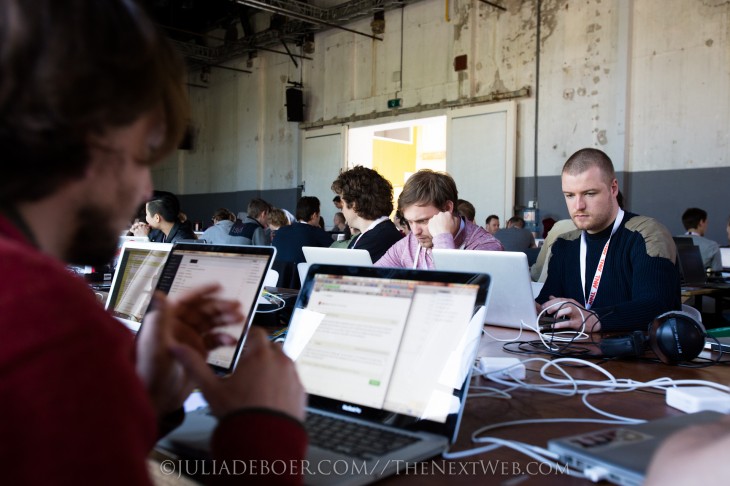 The ‘Kings of Code Hack Battle‘ is always a highlight at TNW Conference. The projects – developed over 30 hours – are often quirky, inventive, beautiful, or a mixture of all three. The batch this year were equally impressive, stunning the crowd and our expert jury.

We had nine API partners for the hackers to utilize this time around: SendGrid, Deezer, Pearson, Mashery, Spotify, Interoute, Verisign, Twitter, PayPal and Push.co. Below, we’ve selected a handful of hacks that really stood out.

This website is the ultimate travel guide for trendy travellers. It taps into Instagram and Twitter to pick out the most popular places in seven cities, based on the current volume quantity of related tweets and photos. A carousel shows the top five locations, with a timer for when it’ll be deemed too “mainstream” to visit. Clicking on the Instagram photo will show recent tweets and, using weather data, answer the question, “Do I need sunglasses?”

Billed as an “epic quiz battle,” this competitive hack integrates Deezer, Spotify and Twitter for quick musical contests. Users register with their Twitter account, before pairing up with another ‘bear’ to guess tracks based on short previews.

“I don’t care where we go, as long as it’s hot.” I suspect many people will have uttered this phrase while planning a long overdue vacation. HolyCelsius helps you decide by listing travel destinations that match your preferred climate. The mobile app even links to a travel operator where you can book your flight.

The ever-growing utopia of music streaming services poses a new challenge. How do you share tracks, albums and artists between them? It’s easy enough to grab a “share” link on Rdio, but what if your friends are all Xbox Music subscribers? With PlayLi.be, you can create a single URL that points to the track on both Spotify and Deezer – so the recipient can listen to your favorite tunes on their preferred app. Just throw in the URL from either Spotify or Deezer and PlayLi.be will find the equivalent on the other service.

What would a Snapchat app for music look like? SneakJam lets you search for any track on Spotify’s music streaming service, before pulling a 10-second extract based on the regular 30-second preview. Choose a few contacts and the mobile app will send them an email with your bite-sized teaser. If they dig the track, there’s also the option to play the full version inside Spotify.

In this top-down racing game, players can only propel their vehicles using trending hashtags on Twitter. Select a popular keyword and, over the next 140 seconds, the car will inch forward with every new tweet that contains the chosen hashtag. Finally, a way to settle the age-old question: #Android or #iOS?

While you’re at a party, there’s nothing worse than listening to a track with a minute or two of dead silence at the start. It could be a great track, but the empty seconds quickly ruin the atmosphere – or make people wonder whether your laptop has died. With MxR, you can quickly remove intros and outros before adding the track to your playlist.

If you’re in a nightclub, fighting your way to the DJ and shouting a song request from the bottom of your lungs isn’t exactly enjoyable. With Spotigrid, listeners can quickly contribute their suggestions via email. The track appears in a collaborative playlist and when it eventually rises to the top of the play queue, the user gets a notification email. Simple, but incredibly helpful.

If you’re after the perfect playlist for your car, look no further than Beat for Speed. The novel iOS app will automatically change tracks depending on how fast you’re driving. So when you’re stuck in traffic, it’ll select some slow reggae to keep you relaxed, before queing up ‘Highway to the Danger Zone’ when you put the pedal to the floor. The app also considers the time, weather and your location to make sure your tailor-made playlist is just right.

Soundhub is a mobile app that creates playlists based on the weather at specific locations. A seemingly endless downpour will be reflected with a chilled out mixtape, while a scorching hot afternoon triggers an upbeat compilation to keep everyone smiling. Fifty tracks make up each playlist and users can upvote or add their own suggestions at any time.

Tinder is a controversial app, but most people can agree that its gesture-based interface is refreshingly simple. Just swipe horizontally to either approve or dismiss other lovelorn users. Wildcard uses the same approach, but for conferences – the app shows you who else is attending and helps you decide who is worth talking to. If the other person expresses an interest too, a connection is established and you can organize a time and place to meet up.

When you’re throwing a party, everyone wants to pick the music. But in the digital age, that often means everyone is hunched around a laptop debating which album or floorfiller should be queued up next. Wetune creates a genre-based playlist where everyone can vote for the tracks they want to hear next.

Spread the word. Twitter is an fantastic platform for activists to raise awareness and support for their cause. Hashtagivist is a site that makes it easy to find and contribute to hashtag-supported campaigns – project leaders can submit any number of hashtags and you can quickly show their support with a pre-filled tweet. By categorizing hashtags, Hashtagivist can also alert you whenever an inspiring campaign is set up on the site.

Spotify is a beautiful music player, but its ties to Twitter are fairly basic at the moment. Pulse is an attractive Spotify app that shows you the most recent and popular tweets about the track you’re currently playing. It’s dead simple to use and the app updates automatically as you browse and select new tracks.

This delightful browser plugin was the overall winner of the Kings of Code Hack Battle, and with good reason. The add-on provides contextual information from a number of different sources, including Wikipedia and Crunchbase, for any word or term that appears on the webpage. So if you’re on a company’s site and want to know more about them, you can quickly pull in more information from around the Web. Congratulations on the victory!