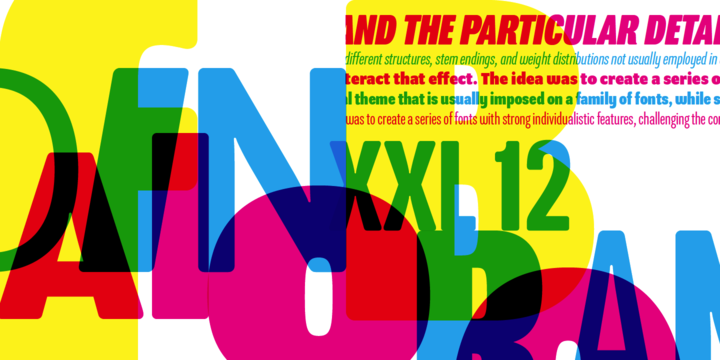 Anyone who’s tried their hand at designing a typeface will know it’s a wildly difficult process, and to actually come out at the end with something attractive takes an extreme amount of skill, taste and patience.

Type design isn’t for everyone, but typography is, and nearly every designer works with it every day. This is exactly why Type Release creator Sean Mitchell is here to share with you a list of 32 beautiful typefaces, all of which were released over the last month. See his findings from April, only on TNW:

A typeface made of layers, taking as a basis a sans and a slab font, Trend is trending.

Intended to be used everywhere where a pleasant feeling should be conveyed.

A modestly condensed version of the original Verb family.

By blending elements of twentieth-century neo-grotesque, humanist and geometric styles, Doctrine is at once universal and idiosyncratic.

A type designer’s typeface. It’s about the craft of typeface design and the particular details and effects that type designers fret over when they design type.

A condensed sans-serif, inspired by the industrial lettering of the 20th century.

A warm and delicious hand-lettered typeface in two styles, bold and ornaments.

Offers a complete range of possibilities: frames, ribbons, hearts, flowers, ornaments, swashes, endings, ligatures and all the alternates you need.

A lively set designed by Kyle Steed with a personal hand-drawn style.

Makes extensive use of Contextual alternates to create a proper ebb and flow from letter to letter.

Painted on a wall by an eccentric Canadian with a paint roller. The result is an unusual combination of straight, evenly weighted strokes and rough, handmade charm.

A handwritten font, designed with a japanese brush and sumi.

A font that is authoritative, but never sacrifices its humanity.

It can be elegant and subtle, it can be strong and dynamic, friendly or powerful.

A condensed sans-serif display typeface thats got a knack for propaganda posters and industrial buildings.

A classic serif titling face ideal for setting at large sizes; slightly condensed, light, with a very fine weight on its thinnest strokes.

A delicate, handwritten font with a somewhat masculine feel which mimics the natural stroke of pointed pen calligraphy.

A serif handwritten font, can be enhanced with a bicolor interior, ribbed or full.

A brighter and more legible slab serif than most, Mislab aptly combines the strength of a slab serif with the lightness of a sans-serif.

Characterized by quickness, lightness, and ease of movement.

The sans-serif version of the Selfico designed by Nico Inosanto.

A dotted typeface loosely based on the 13 punched-out caps on Marcel Duchamp’s 1934 Green Box.

Influenced by the geometric style of sans-serif faces of the 30s.

A tribute to the song “There Is A Light That Never Goes Out” by The Smiths.

The first Jim Rimmer typeface to make the transition from metal to digital.

Ironically recalls the “Swiss International Style” of the 50s and 60s.

Eager for more? Check out our lists for March, February, January and Winter ’12. They’re worth it — we promise. You can also take a peek at our dedicated Design & Dev channel.