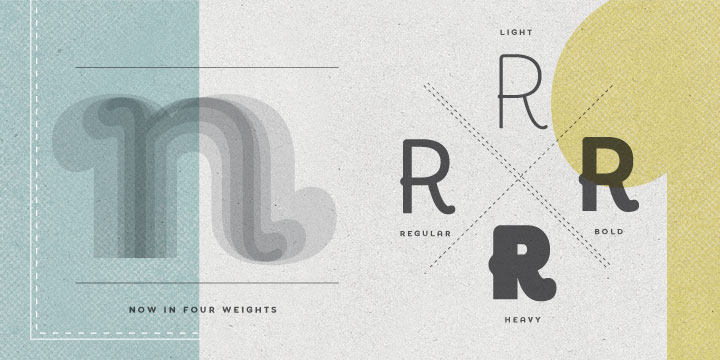 Anyone who’s tried their hand at designing a typeface will know that it’s a wildly difficult process, and to actually come out at the end with something beautiful takes an extreme amount of skill, taste and patience.

Type design isn’t meant for everyone, but typography is, and nearly every designer works with it every day. This is exactly why Type Release creator Sean Mitchell is here to share with you some of the latest typefaces released this past month. These are his findings:

Light as a feather.

A contemporary grotesk, inspired by years of working as a graphic designer and the constant need for sans serifs with a flexible voice and durable performance.

Consists of letterforms with large x-heights, wide, bracketed hairline serifs, and slightly angled stress. Its italics have crisp yet painterly undertones that suitably contrast with its upright counterparts.

A clear and simple sans serif typeface. Straight lines are combined with precision curves to form a functional and versatile typeface.

Designed upon a proportional structure which makes it surprisingly legible even in very small text sizes.

A cheerful band of letters that bounce across the page and get together to create words in four weights. Quirky without being too whimsical.

A pair of typefaces that contains four variations of uppercase letterforms, inspired by the playfulness of arranging individual wood type letters.

Inspired by old wood types from the classic western-movies.

A calligraphy font based on calligraphic style called Copperplate.

A typeface completely designed with the sole function of being used on eReader devices. Designed by combining many different elements on legibility theory and how the eye reads.

Conceived by writing out variations of each character by hand using a roller pen before the scanning and digitising process.

A hyper-display didone; a true magazine header of extraordinary charisma. Designed to contain and communicate a distinct creative expressiveness.

Showing both distinct elegance and boldness while optimized for higher legibility. The Metro family was originally designed for the Metro of Copenhagen.

A restrained bohemian vibe that seems particularly appropriate for a coffee house or an art gallery.

A sans serif typeface with a technical and geometric appearance. The family includes 9 weights with matching italics. Its large x-height makes it especially legible at small point sizes.