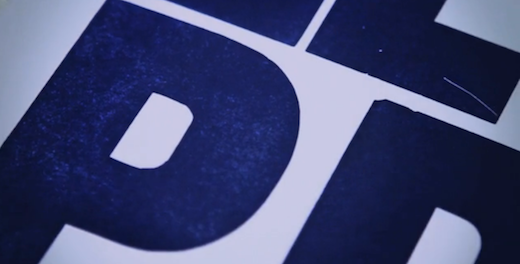 Traditional letterpress printing is a beautiful, time-honored tradition that has survived over 500 years. But within the past few decades, modern computers have led these classic machines to their graves.

Obviously, computers are wonderful things, and a great designer can create something amazing with nearly any tool. That said, there’s a magic to letterpress that should be preserved — even if only for special occasions. It would be a waste to toss aside such an important part of our history as designers, and these 7 short films help capture the magic while we still can:

Upside Down, Left To Right: A Letterpress Film

This short film was released just 8 days ago, and has already received quite the response. It follows Paul Collier around one of the few remaining movable-type printing workshops in the UK, situated at Plymouth University. The ending credits are particularly worthwhile to stick around for.

This film takes a quick look at the printing process with impressive motion graphics. It guides you through the process of setting the kerning, creating the lockup, mixing the ink and so forth.

Ink & Paper tells a sadder story of the fall of traditional printing methods. Like I said above, there’s a magic to letterpress that should be preserved — even if only for special occasions. Letterpress is to graphic designers what analog film is to photographers.

This is a short film documenting the preparation for the Reverting to Type show, curated by Graham Bignell & Richard Ardagh. It showcased the work of twenty contemporary letterpress practitioners from around the world in London.

This video looks at how one letterpress studio has moved away from moveable type to plates in an effort to modernize the process, while still retaining the original, timeless character.

Though sponsored by Jack Daniel’s, this film is a classic look at a modern-day letterpress print shop. It takes us through the step by step (layered ink) process of printing a poster, with a little banjo music too.

Erase is a quick look at the creation and development of a poster design at the University of the Arts London. “Forget what you learnt to start something new.”

This one isn’t a film, but it is a beautiful preview teaser that makes the actual film look like a very worthwhile watch. “Linotype: The Film” is a feature-length documentary centered around the Linotype type-casting machine. Called the “Eighth Wonder of the World” by Thomas Edison, it revolutionized printing and society.

Of course, designers shouldn’t abandon their computers, but if you take some time to marvel at this beloved designasauric tool, you’ll see how special it really is. We can do all we can to replicate the texture of quality paper and hand-mixed ink, but after a certain point you’ll see that you can’t really fake it. That’s why, on a friday such as today, it’s important to admire our history as designers.

Check out our full Design and Dev channel for more inspiration! Also, you can exclusively view typography articles here.

Read next: Twitter investor Bill Gurley says the company is 'not thinking about IPO'