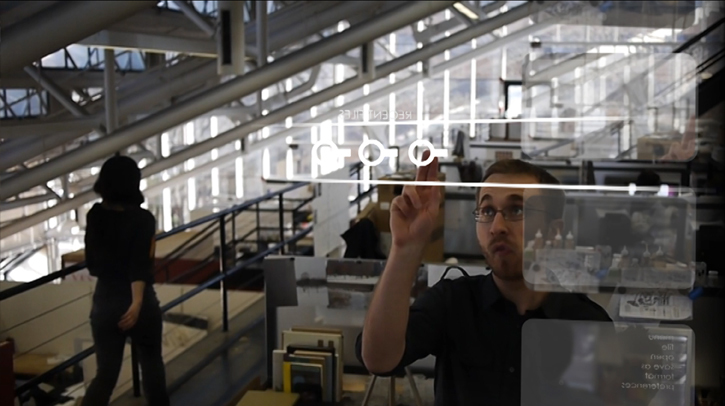 The possibilities unleashed by augmented reality are limited only by the bounds of our imaginations, but so far we’ve only seen the technology used to add layers of data to the world as we currently know it. What about using the potential of augmented reality to start shaping the physical world we inhabit?

Harvard Graduate School of Design student Greg Tran recently won the thesis prize for his project Mediating Mediums, which looks at what would happen if we started to create built spaces based upon potential applications of AR.

“There has been a lot of talk about augmented reality, but very little has been said in regards to the hybridization between the built environment and digital worlds,” says Tran. “Practically speaking, the possibilities allow for more immediate customization and optimization of spaces, but can also provide completely unexpected ways of experiencing buildings.”

What we’ve seen from augmented reality apps like Layar and Google Goggles just scratches the surface. It’s great to be able to translate text on-the-fly, or to see current apartment rentals by pointing our phone down the street, but what is possible in a fully immersive environment is mind boggling.

A short version of the video explanation can be found below. There’s also a longer, 19-minute version.

Architecture has always been the medium which defines the spaces we live in, but with the emergence of Digital 3d or “augmented” technology, immaterial stimuli is beginning to encroach upon those spaces. Thus far, digital forms have few relationships to their material context, but there is interesting potential for their interaction. Digital tools act as an infrastructural and informational prosthetic, but will be most profound when they tie back to the human body and engage their surroundings.

In antiquity there were three forms of material art: People looked at painting, walked around sculpture and walked through architecture. With the contemporary digital equivalent, “augmented reality” functions merely as sculpture. We move around an AR object, but it isn’t embedded with the physical environment. Once the Digital 3d becomes more immersive, it can be woven into material buildings and start to function architecturally. Ideally, we can design material and digital matter to play off of one another to create formal, spatial and functional potentials.

While we may still be years from a time when buildings are constructed that fully utilize the potential for augmented reality technology, it’s certainly now possible to imagine it, especially with the help of projects like Mediating Mediums.

“People react much differently to the project and are sometimes amazed or even scared at the possibilities,” says Tran. “I’ve had similar thoughts, but really believe it can have a positive impact if it’s developed correctly.”

And therein lies the challenge. Developed properly, this has the potential to revolutionize the built environment. But even not taken to the limit, it’s still a dazzling prospect. Smarter, more beautiful buildings, that act as a canvas for data.

Read next: Rumor: Yahoo bidding on The New York Times?