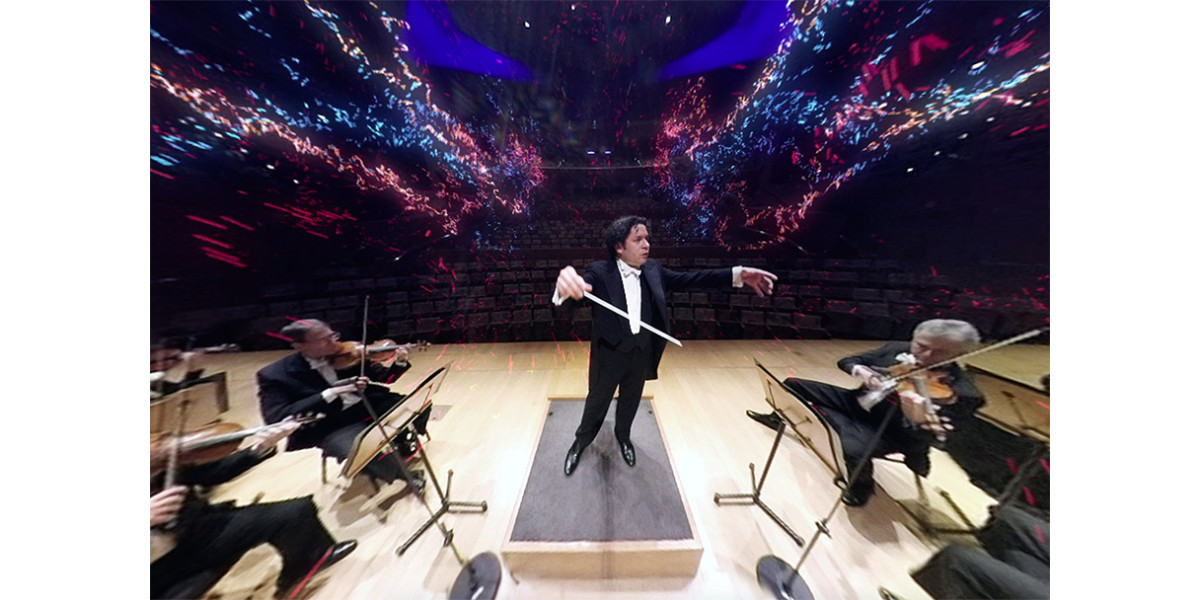 Beethoven’s 5th Symphony — with its unique and stirring opening notes — is probably the most recognizable piece of music on the planet. That’s one reason why it was chosen by the LA Philharmonic as kind of a classical music ambassador to debut its new Orchestra VR app, designed by Oculus and made for the Oculus Rift and Samsung Gear VR headsets.

Available as a free download starting September 11 in the Oculus and Gear VR stores, anyone with a headset can use it to view the specially filmed opening minutes of the orchestra’s 5th Symphony performance, led by Gustavo Dudamel, at Walt Disney Concert Hall.The app release coincides with the LA Phil’s debut of VAN Beethoven, its mobile virtual reality tour, which hits the road that day through October 18th, bound for communities throughout Los Angeles.

The VAN Beethoven truck is equipped with a complete concert hall-VR setup, designed to transport viewers with a 360-degree, 3D performance of the symphony’s opener.

The fact that every school kid knows these famous opening notes — if not exactly what it is — breaks down the barriers to classical music for everyone, and that is part of the mission of VAN Beethoven, says Amy Seidenwurm, the orchestra’s director of digital initiatives. “I’m a nerd, and thought it was a great excuse to take technology and see if we could marry it with an old art form and see what we could get out of it.”

With VR Orchestra, the team, working with the interactive agency Secret Location, created a spherical camera, made with six modified GoPro cams, to capture the space and create the necessary presence for a realistically immersive experience of being among the orchestra. Such a thing would be impossible to achieve in real life.

Immersed in the 5th

TNW was able to snag a preview of the VR Orchestra app, and I can testify that with the Oculus experience, you will never again see classical music in the same way. First, I sat patiently as Amy outfitted my little pinhead with Gear VR goggles and earphones.

I’ve done VR demos before, so I’m perhaps a little jaded about the whole immersion thing — I have to really concentrate to suspend disbelief. Despite that, I was pleased by how smooth and lifelike the performance felt, as I twisted and turned around a conference table, peering up, down and around. Literally everywhere I looked was a spherical, 3D version of the orchestra playing as the conductor and players moved to the center of my vision.

The app moves the action around your field of view, even if you sit still, providing excellent presence and letting those who can believe they are sitting in the middle of a concert hall with the action swirling around them. Bolts of light appear from nowhere, and they have a particular significance to the conductor, I later learned.

For my own experience, I knew where the table was at all times during the demo, but still found myself reaching for it, as if for reassurance of my position and orientation in the room.

In LA, the public will not see this presentation in an airless conference room. For them, the realistic performance atmosphere will begin the second they step into the customized truck, outfitted with carpet and seating from the Walt Disney Concert Hall, where the actual concert was filmed.

“We’re setting the stage as soon as someone comes in to see what it’s like to come to a concert at Walt Disney Concert Hall, and trying to bring the concert hall out to the community,” said Seidenwurm. “Making those cultural connections with the community is a big part of it,” she said.

Once inside, the audience will put on the Oculus headset and be transported to the venue. The visual experience is augmented by a soundtrack that adapts to the viewer’s perspective; whether the viewer is in front of the orchestra, behind or standing in the middle of the symphony, the music shifts according to the listeners’ positions, enhancing the realistic sensation.

The performance was recorded in binaural audio with 40 microphones throughout the auditorium, and the sound adjusts based on how you move your head. “Biural audio is a pretty new technology,” Seidenwurm said. “Everybody focuses on the visual part of Oculus, but we thought it was an opportunity to really focus on other senses as well. If you want to be immersive, you need to concentrate on [other] senses, showcasing the sound and visuals as well as we can.”

In addition to the music and the orchestra, there’s an interpretive computer graphics experience that comes from the conductor that at first struck me as gimmicky — until I came to understand its symbolism.

“I felt that we needed to add things that really use the technology and add some 3D elements to the piece,” said Seidenwurm. “We interviewed Gustavo the morning before we shot this piece and he talked a lot about fate and destiny and the warring of good and evil. The red jellyfish looking things represent fate and …  there’s a war between fate and spirits later on. We didn’t want to throw a lot of flash at you; we wanted there to be a narrative to it.”

All VAN Beethoven stops are free of charge. If you live somewhere else, just download the app and watch it from your couch — if you have the gear, of course. Oculus Rift will not be released until the first quarter of next year, but the Samsung Gear VR is the headset that ran my demo.

VAN Beethoven will be touring LA’s underserved communities as well as festivals, museums, schools, the county fair and outdoor events targeting folks who may never voluntarily set foot inside a concert hall.

Said Seidenwurm, “A lot of people think they don’t like classical music, but they probably secretly do.”

All images courtesy of the Los Angeles Philharmonic.