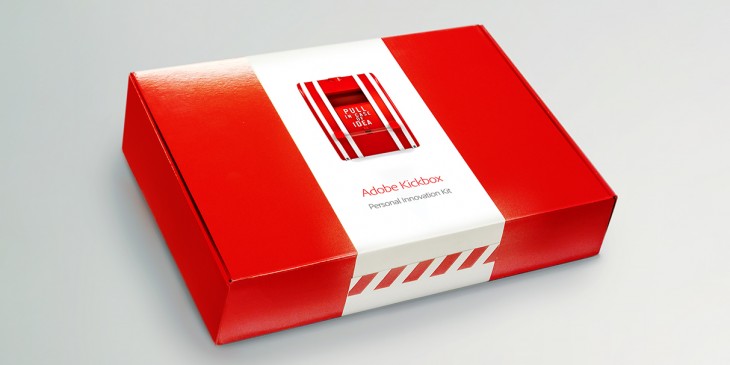 In a talk at The Next Web Conference, Kickbox’s creator Mark Randall, vice president of creativity at Adobe, described to a packed audience how two years ago, the company initially developed Kickbox as an internal process. Adobe has since open sourced Kickbox for other organizations and entrepreneurs to adapt for themselves.

Today, Kickbox is a complete system designed to support new ideas derived from personnel on every level of the company — from the mail room to the board room — bypassing traditional roadblocks that often sink good and potentially profitable products.

With Kickbox, said Randall, the highest paid person in the room does not get the final say over which idea will move forward.

The emphasis, instead, is on the target audience of users and customers because ultimately they are the ones who make or break any product or service. Regardless of how good an idea sounds on paper, if the target audience doesn’t respond, then it’s going nowhere.

“With Kickbox, the focus is on creation and innovation rather than on products,” Randall told TNW in an interview. “A lot of tech companies are looking at products, but this is an outgrowth of the creative process and we put it out there [for ideas to] to fail fast and inexpensively, to increase the failure rate.”

That may sound counterintuitive, but in reality, investigating 1,000 ideas under this program costs less than testing a handful of ideas under an old corporate system.

“There are a lot of creative ideas that do not match the filter of the company,” Randall said. “We are looking for the wild card, the outlier, the explosive new idea that’s hard to recognize.”

Part of the allure of Kickbox is that it’s literally a box — and potentially two boxes — with valuable contents that you can hold in your hands. The red box is kind of a desert island kit of the basic supplies needed to get an idea moving, including a pre-paid credit card worth $1,000.

This seed money can be spent on anything related to the idea — without receipts or reporting or second guessing. The money is accompanied by a complete, programmed, guided process and a reference card for each level: Inception, Ideate, Improve, Investigate, Iterate and Infiltrate.

Each step facilitates actions allowing you to advance toward your goal. With that, “you are the CEO of your idea,” Randall said.

If and when you finish the red box successfully, you can advance to the blue box. While every red box is the same, every blue box is different. Success is measured by data gathered using various survey tools and analytics that actually test the idea with the target audience — not the opinion of a highly paid supervisor. Adobe Kickbox participants do not have to discuss their project with their manager if they don’t want to.

Randall says within Adobe there are 23 blue boxes for every 1,000 red boxes, representing projects that move to the next level. Perhaps one idea out of the 1,000 actually becomes a bona fide product. Perhaps other ideas are incorporated into existing products or are offered as adjuncts. Results will vary.

Adobe has made the Kickbox program available online to all interested parties who seek to establish their own innovation pipeline. It is distributed under a creative commons, share-alike, attribution license.

Read next: DIY waterproof your Samsung Galaxy S6 by encasing it in silicone because why not