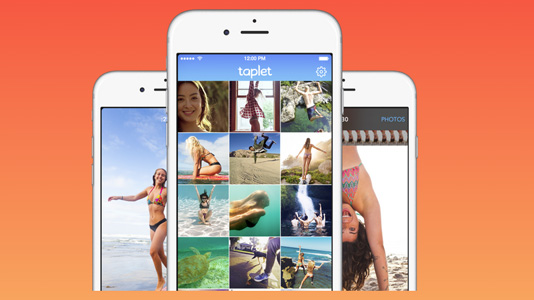 It seems far-fetched — until it’s not. Sometimes you actually want to pull a still image out of a video.

Taplet, which was released today, is a free app for iPhone that lets you either shoot a video or pull in a previously shot video from the Camera Roll. Record or upload any iPhone, GoPro or Snapchat footage and tap the screen to pull out your chosen HD images.

A smart enhance tool lets you retouch your pictures, applying brightness, contrast and sharpening, mixed with a little saturation boost in a pleasing combination — at least for the picture I used. When you like what you see, you can save and share the final version at full resolution to Instagram, Twitter and Facebook or via email or text.

Shooting is easy. Taplet shows you the big red button to start and stop your video. You can reverse the camera to film yourself  and tap the flash icon to illuminate a dark scene. You can shoot in landscape orientation, but you must perform all other operations in the vertical view.

When you’re done shooting video, a small animated icon with an arrow signals that the app is processing your movie and then presents you with the frames. Simple controls let you view at shooting speed or proceed slowly forward or backward. Tapping on the filmstrip also lets you navigate through the video to find frames you want to save.

When you’ve made your selections, tap the forward arrow, which brings you to the pane where you can view and save — or trash — the images you chose.

You must save each image individually. The app automatically then applies a watermark, which you can remove by having three friends download the app or paying a one-time fee — the app gives no clue as to how much it costs.

Many people were part of the launch of this app and seed money investment to the tune of $1M includes Def Jam co-founder Russell Simmons, GSI Commerce founder and 76ers minority owner Michael Rubin, CAA Sports co-head Michael Levine, Vertigo Entertainment’s Roy Lee (producer of The Departed and Lego Movie), Management 360’s Guymon Casady (co-executive producer of Games Of Thrones and producer of the upcoming Steve Jobs movie) and others in media and entertainment, the company said.

Taplet joins other apps like Vhoto. which also lets you extract still images from video, but in a different way.

Read next: Something for iPhone finds good reads from your Twitter friends -- swipe left on what you like