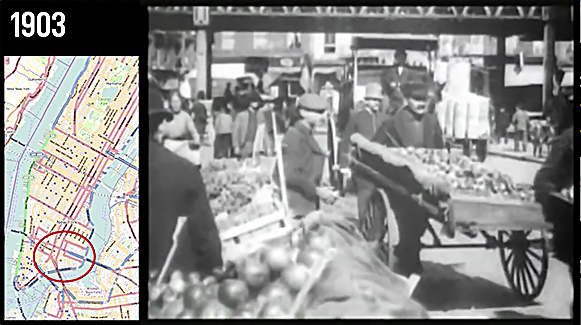 Even if you’ve never stepped foot in New York City, scenes from YesterVid’s vintage footage dating back to 1896 –and spanning 1896 to 1905 — is breathtaking.

Despite its faded monochromatic appearance and heavy grain, it showcases the distinctive character of that great metropolis that is still alive today. There’s the parades, the well-dressed people, the playful, casual atmosphere, the skyscrapers, the majestic surroundings, the cops, windy spring days and of course, ancient landmarks that have not survived the modern age. It even superimposes the Twin Towers into the landscape at their approximate position, because that’s history too.

The clips, derived from the Library of Congress, runs a little over eight minutes, but it doesn’t seem that long, as it’s broken into several musical segments. Most helpfully, the video doesn’t leave you stranded for context. The footage is mixed with an animated map that pinpoints the exact modern location of everything you see, while captions on the video dive more deeply.

Some viewers have complained about the musical selections — some I liked and others not so much — music is a touchy thing. But luckily, the video does not rely on these arbitrary selections for its sensibility and you can simply turn the sound off if you don’t like it.

The YouTube page contains all the historical information on video locations for your reference.

I loved the scenes of  people going about their business in the big town, though I’m afraid the subway hasn’t changed all that much.

Read next: Zap brings the business card into the digital age; lets you make it rain