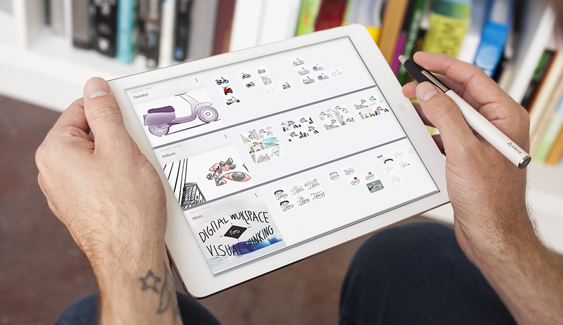 While it may not count as a full-blown trend, it’s worth noting that some high-profile tech companies are now expanding beyond their traditional sphere. For example, last year Adobe launched its first-ever hardware product — Ink & Slide, a pen and ruler set for the iPad.

Today, Adobe’s collaborator Adonit — whose technology powers the Ink pen — is expanding from its hardware base into the software realm with Forge, a prototyping tool for the iPad. At first glance, Forge appears similar in concept to apps like Adobe’s Sketch and FiftyThree’s Paper. But in fact, it differs significantly from those tools.

Instead of creating yet another sketch app, Adonit has positioned Forge as a visual brainstorming tool to help designers and others with the design process.

“Forge is a space to work like visual thinkers do,” Peiter Buick, Adonit’s chief design officer, told TNW. “It’s a place where you can pull an inspiration, push an idea forward through multiple iterations and drafts, quickly move from one sketch to the next and pull back to look at the bigger picture.” The ability to save all drafts sets the stage for the creative process to flow and progress with new thoughts that can be easily recorded and saved.

Forge is not designed to create a finished drawing; rather, it allows users to work through multiple iterations of an idea, and then share that idea with team members.

“It’s about drafts and doing lots of iterations of really similar things and continuing to see how it evolves. Being able to pull back and see what you’ve done … is something we use every day, but we never found a way to do it with software,” said Buick.

Instead of recording inspiration in the moment that later stays locked in a notebook page view, Forge’s wall view, lets you see all the various versions of your idea at the same time — like Post-it notes on a physical wall — facilitating creative thinking. A layers function lets you mix drawings into different combinations. “The ability to pull back, organize, and sort through ideas and then move between the sketch and the wall is very powerful,” Buick said.

Adonit sees Forge as complementing formal sketching tools like Paper and Sketch on the one hand and ProCreate and Sketchbook Pro on the other: It is designed to function as the mid-point between the first idea and moving that idea forward.

“This lives in its own space and is a bridge between the first sketches and the final design. You’re really getting dirty and grinding out ideas and really pressing, draft, draft, draft, and really seeing it, and then pausing to step back and and then diving back in,” said Buick of the process.

I was struck by the app’s ease of use, swift performance, flexibility and variety of adjustable brushes and color palettes. It makes ample use of pinch, zoom and swipe gestures, while a layering function lets you combine iterations at will.

Forge, of course, is designed to be used with Adonit’s line of professional styluses, such as the Jot Touch, whose PixelPoint technology is incorporated in Adobe’s Ink. The basic app, which includes two walls, is free on the App Store. For a $3.99 in-app purchase you get an unlimited number of project walls. There’s also a way to order a stylus as an in-app purchase, as Forge integrates Apple Pay. It requires an iPad 3 or later.