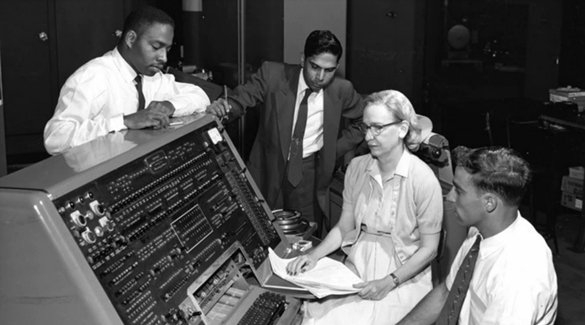 Considering the scandalous lack of women entrepreneurs in Silicon Valley, and the debased treatment some receive in the industry, it can be hard to remember that women helped form the backbone of computing when it mattered most.

‘The Queen of Code,’ a brand new 16-minute film from actress Gillian Jacobs, serves up a humorous and inspiring reminder that there is indeed a Mother of Computing. Her name was Grace Hopper: mathematics professor, US Navy Admiral, instrumental in creating the first compiler and the COBOL programming language, popularizing the terms “bug” and “debugging” and much more in her long career.

Starting in World War II, the US government famously recruited women into both the workforce and the war effort as the men were sent off to the front. Many of those women became “human computers,” working in teams to hand-calculate ballistics trajectories.

Hopper, who had previously been rejected from military service for failing the physical, was assigned to one of these units at Harvard, becoming one of the first programmers of the Harvard Mark I.

After the war was over, Hopper managed to overcome obstacles to continue in the computing field and rising through the ranks of the Navy — retiring and called back for active duty on several occasions.

The short is part of ESPN and FiveThirtyEight’s Signals series.

➤ The Queen of Code

Note: In order for the movie to show up on the page, you may have to reload.

Read next: Google Ventures introduces a site and book to help make your startup's product better in 5 days