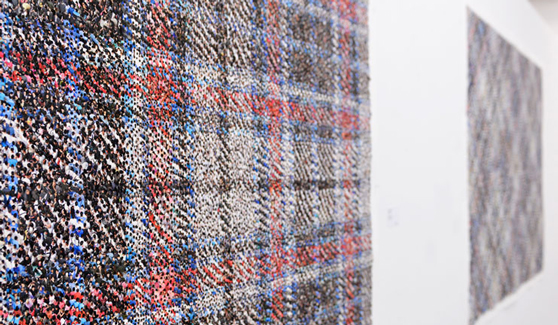 There’s plaid — the pattern that most people are familiar with — featuring traditional tartan, tattersall, glen plaid, madras and gingham weaves.

Then, there’s arguably a completely alternative variation on the theme in a series of photographic collages by Beijing artist Zhang Bojun.  Called “We,”  it is derived from seven years of photographic outings on the streets of China.

Zhang shot street scenes that included thousands of people and eventually wove them into tapestries spanning three feet wide. When observed up close, they reveal those individuals in their own daily transit; from a distance, the whole bears an uncanny resemblance to classic plaid patterns.

The work is a commentary of the rigors of life in China, which the artist feels both a part of and an empathy with. Said the artist in a statement, “In the past 30 years the rapid developing speed of city which had never happened in the history of China before required much more immigrants to work in the city, so that many people moving back and forth like migratory birds.”

However its artistry also speaks to the technical compositing skills that Zhang demonstrates in the final product. Said the artist, “I started to separate people’s figure from photos, removed and match up them, which totally changed the initial motivation of taking their pictures.”

Zhang describes the work in his own words, which you can translate, however imperfectly to the language of your choice, if you do not read Chinese. Does this work speak to you? And if so, what does it say?

Said Zhang, “…everyone I encountered is a mirror of my own, I see we ourselves in the mirror. That’s why I name the recent completed work We and its theme is us.”

We is on display at OFOTO Gallery in Shanghai until January 20.

Read next: Control your computer from your iOS device with Chrome Remote Desktop