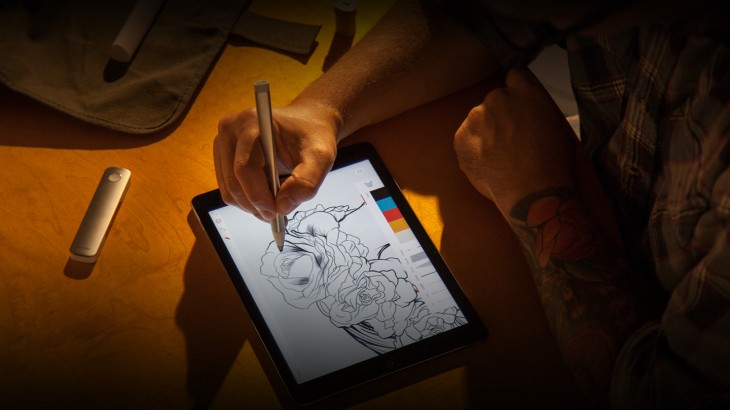 In the Ideal Gifts series, The Next Web team shares personal recommendations for gifts to give this holiday season.

I’m one of those people who starts out doing things the most basic, low-tech way — mostly because I hate extraneous objects and clutter. Thus, my initial thoughts surrounding tablet styluses was, who needs ‘em? I have fingers.

Happily, I’m still in possession of those fingers, but under increasing circumstances, I find myself gravitating to the Adobe Ink & Slide pen and ruler set for the precision it affords in my visual work.

When I’m using the specific Adobe mobile apps that Ink & Slide was created for — Illustrator Line and Illustrator Draw and Photoshop Sketch — it’s almost second nature to sign in, pair the pen, and get started. It’s not just a matter of using an instrument rather than my clumsy fingertip, Adobe Ink features attributes like pressure sensitivity, palm rejection and shortcuts, too.

Even for art or photography apps that this tool was not designed for, I also tend to grab my Ink (which uses the same Pixelpoint tip tech as Adonit Jot Touch) to make the job smoother and faster, though not all advanced functions will work with other apps.

The Ink has a beautifully comfortable design that is super lightweight but needs to be used with more recent iPad models such as a fourth generation iPad, iPad Air, iPad Mini or iPad Mini with Retina display.

The pens work with Bluetooth LE, accelerometer data and the iPad’s capacitive touch screen to place the ink point under the stylus tip. The slide is a mechanical, non-connected tool.

This set is not aimed at those on a budget. Adobe has set the price at $200, but the street price, say on Amazon, is about $149 or so. If you don’t need the ruler, you could also save by purchasing the Adonit Jot Touch on its own for $100 or about $75 from Amazon.

Read next: What next after the Jolla Tablet’s $1.2 million crowd-funding success? Maybe a smart watch