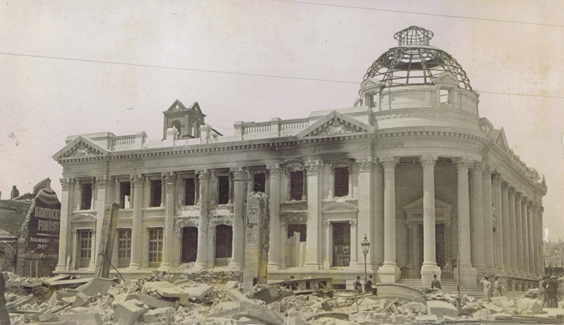 Sometimes viewing a historical scene of utter devastation can serve to steer the creative process in a new direction. And while there’s nothing good about how this collection of nine photos of the 1906 San Francisco earthquake (estimated 7.8 magnitude) came about, these images are remarkable not only for their stark and soulful beauty — but also for their storytelling power.

Flash forward to the present day and things have changed a lot, but then again, maybe not so much. One thing remains: The citizens of San Francisco live perpetually under the threat of  another devastating “big one” — which we imagine will be something on the same order of magnitude as that which occurred 108 years ago.

The more recent Loma Prieta quake of 1989 — one in which I nearly lost my balance watching the earthquake wave move underneath concrete as I stood waiting for the light to change at Castro and Market — is often referred to as “the pretty big one” (6.9 magnitude). San Francisco was warned that the genuine article may well be making a return visit within 30 years, give or take.

Meantime, collector Bob Bragman has shared this unique find, which he purchased for $5 at a local flea market.

Read next: Apple's Beats Music will reportedly be bundled with a future version of iOS