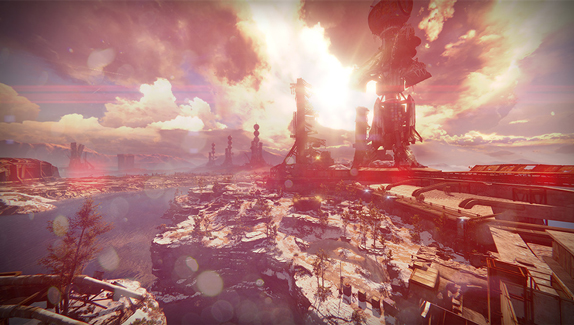 If you’re even remotely into video games, you’ve heard of Destiny. It’s the mega-blockbuster game of the season that’s become a multi-record breaker since its release in September. And now it holds the distinction of being the best-selling new franchise of all time.

Developed by Bungie — the people behind the Halo series — Destiny is a half-shooter, half Massively Multiplayer Online Role-Playing Game (MMORPG) that’s set seven centuries in the future, as humans face extinction. If you’re one of the millions of people who bought it, you know it’s also one of the most beautiful video games ever made.

Destiny is inarguably a milestone for artistic world design in video games — which is why we had to find out how they went about creating such stunningly immersive visual worlds. To do that, we spoke with Destiny art director Christopher Barrett. 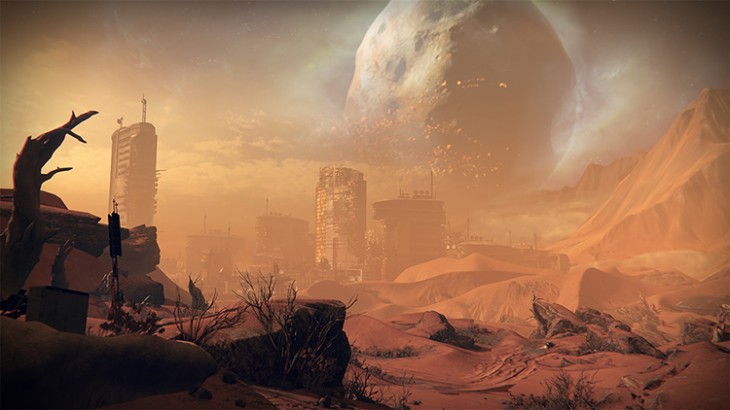 Shutterstock: Designing such large and different worlds from the ground up must have been incredibly daunting. Were there any techniques you found particularly helpful in getting started?

One of the first things we did when we were creating each of the different places you visit was to establish what we called a postcard: in one image, we would set up the tone, the story, and what the players are going to feel when they first land. For example, the Cosmodrome [set in Russia]: The postcard for that area had the big wall, and the line of cars, and the colony ships poking up in the distance. Capturing that feel in an image before even fleshing out the entire destination was something important to our process.

Which came first: the intent to make something visually distinctive or something that served the story?

I think that, with the different planets, we had the idea of what we wanted the players to experience first. What kind of planet do we want them to visit? What kinds of cool elements would be in that place, prior to a particular story? So that was our goal. To create a space that’s compelling, both visually and for players to explore, where a lot of different gameplay can happen.

The planets do have a lot of fantastical elements, but they’re also very recognizable. How do you find that balance between the familiar and the unfamiliar?

You have to feel around a little bit. We certainly had concepts that pushed things a little too familiar, or a little too alien. We talk a lot about finding that right balance. For me, if a player can bring something to the table – a particular thought, or emotion – then we can play with that expectation, or twist it a little bit to make it more interesting to them.

Is there an example of how you did that in Destiny?

There’s an idea of Venus, of it being very hot and arid. There are old stories and pulp science fiction about jungles on Venus. Those were the ideas we wanted to play up. Taking familiar elements, like a palm tree; people have a feeling about a palm tree. They’re used to that. So we’ll take it and make it wildly overgrown, or have thorns on it, or more twisting branches. It’s coming up with some feeling, some expectation, and then blowing it up, making it more fantastic than it already is.

Is that why you also put recognizable — but abandoned — human cities on the planets? As a kind of familiar anchoring device to evoke something in the player? Because it did with me. I found myself thinking, “People like me lived here once. What happened?”

It is the humanity. We can imagine that potentially being our future. That definitely brings some emotional element to it. Exploring our possible future is kind of an interesting concept, as opposed to just an alien civilization — that there’s this unknown future to humanity and we’re going to explore its mysteries and find out what happened.

Despite the fact that Destiny is post-apocalyptic, in a lot of its landscapes the design never feels like your typical bleak or empty wasteland; they somehow feel full of life. What was the intention behind that?

We wanted to create a place that players want to play in. We want players to come back to those places over and over and have many adventures. Therefore, I think it’s very important that you create a hopeful environment, where things aren’t too negative or unsettling. Certainly we’ll have spaces that explore those themes — alien fortresses or a medieval dungeon. But those are all grounded in “What’s the fun version of those things?”

Beyond that hopeful tone, from a design perspective, how do you ensure that you create a world people will want to keep coming back to?

A motto for Bungie is, “We make games we want to play.” So our biggest compass is, “Is it something we want to explore? Do we get excited about it in our design team?” I think that’s a great litmus test for, “Will other people be excited about it as well?”

A lot of shooter games get criticized for not having enough variety in their levels. But the looks of Destiny’s missions feel distinct from each other. How did you go about bringing uniqueness to each of the planets and their missions?

The planets each have their own distinct visual themes. And within those there are sub-themes. One of the most important things that drives players to play is seeing new things they haven’t seen before. That’s one of the tools we can use as world artists to get people excited to explore new places: trying to add as much variety as possible, but still make the world feel coherent.

The worlds of Destiny are often incredibly rich in detail. For example, the crashed planes and rusted cars add a lot to the atmosphere of Old Russia. Can you talk about why designing details like that into an environment are important?

One of the things that art can do is tell stories without words. I think we can tell small little stories all the time through the environment. So the fact that there’s a line of rusted cars that extends into the distance? That’s a whole story in itself. “Who were those people? Where were they going?” I think the more details you can put in the game that open up those questions and get people thinking about a world, without needing words, is great. We try to do that wherever we can.

I’m not going to lie and say we’re not driven as artists to make things that we find aesthetically pleasing. But, first and foremost is the gamer. We want to create something that’s fun for players. If we don’t do that, then no one is going to want to come back, regardless of how pretty it is.