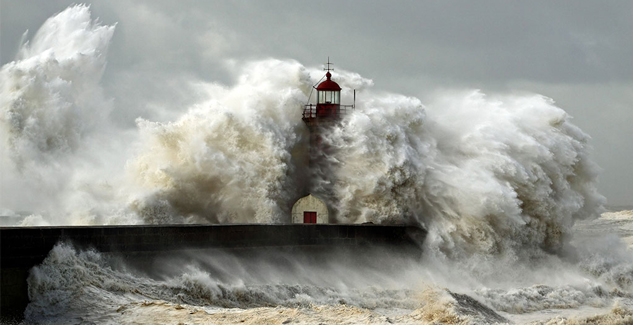 This post was originally published on the Shutterstock blog and has been reprinted with permission. Sarah Maloy is Shutterstock’s content marketing manager. She’s also an entertainment writer, social-media nerd, and chronic binge-watcher.

We look at so many gorgeous images every day that it takes something really unique to make us stop and say, “Whoa.” For me, that “wow” moment came while exploring images of sharks (because of Shark Week, of course), when I came across a series of larger-than-life waves by Zacarias Pereira da Mata.

The Portuguese photographer is just one of many who document the beauty of the ocean, capturing terrifying-but-fascinating images of waves exploding onto shores, piers and lighthouses. Many of the photos were taken at harbors around Portugal, particularly on the Douro river, which runs through both Portugal and Spain. In one image, the contributor even wrote a caption describing winds up to 150 km per hour.

Below, you can further explore a dramatic collection of images. Each photograph shows an enorm

ous wave frozen in time — some look like fluffy clouds; others look like pillars of smoke; and a few even appear to be explosions beneath the ocean’s surface.

Read next: Alibaba teams up with Huawei to let Alipay Wallet users pay with just their fingerprint